It's been a week since Salute and the purchase of our Hordes starter boxes. We've had that week to build and paint our models and now it's time to play our first game.

Aside from the Quick Start Rules included in the box sets, I am the only one who has the full Hordes rulebook and, me being me, I have read it cover to cover, several times to try and understand the way the game plays. I've always been a bit of a rules junkie/jobsworth (my time playing tournaments is to blame) but this attention to detail often keeps us on track and prevents one or other getting away with murder.

For the unfamiliar, the lineups were as follows… 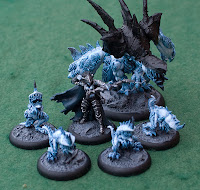 My Legion of Everblight wargroup consisted of my warlock Lylyth, 4x Shredders (lesser warbeasts) and a Carnivean (heavy warbeast).

Bull's Circle of Orboros wargroup was made up of his warlock Kaya, 2x Argus (light warbeasts) and a Feral Warpwolf (heavy warbeast).

But first, who are these factions and why would they be fighting?

The dragon Everblight exists now as an athanc, the heartstone of the dragon buried in the chest of the Ogrun Thagrosh, transformed by the influence of the dragon’s blight. Together they have dominated the nation of Nyss ice elves and produced an army of monstrous draconic spawn to support them. Everblight constantly experiments with the power of his blight’s influence on the Nyss, warping the species into various specialised soldiers, and creating a range of spawn perfectly designed for each battlefield role.

The Circle is a cabal of druids who dwell in wilds and have a dark and sinister reputation with the civilized nations who believe they worship the Devourer Wurm – the terrifying god of the wilds. In actuality the druids draw on the latent energies of the earth, storms and animals to combat civilization and keep the Devourer Wurm from returning and destroying the world. The three Omnipotents that lead the Circle are the most powerful human spellcasters in the world. Savage tribesmen, terrifying beasts and the very land itself marches alongside the Circle when they go to war. 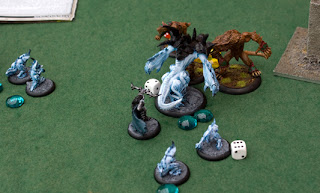 This was very much a learn as we go and we walked our way through the rules, forgetting lots of things, getting things wrong and generally doing things that aren't good for your health but produce situations that require reading up on. 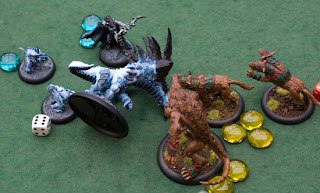 I threw my heavy warbeast out in front and the two armies came crashing together. Alas, after inflicting a lot of damage on one of the dogs, my Carnivean got mugged by the combined strength of the Circle warbeasts and went down in a puddle of his own snot. 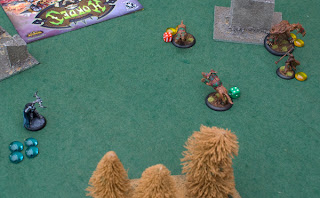 Things carried on in this vein, my lesser beasts not up to the challenge of taking down the Circle on their own. Lylyth was left by herself – first blood to the Circle of Orboros.

This time I decided to play more to my strengths – Lylyth's ranged attacks and the fact that my entire pack can ignore forrest terrain in terms of Line of Sight and Movement. I sat back and danced around the trees, inviting my opponent to come and get me. 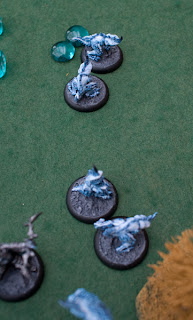 Unfortunately, being a little too clever for my own good, I over-generated Fury on my beasts. This meant that at the beginning of turn 2 I couldn't leech all the Fury off – three of my lesser beasts frenzied and tore chunks out of each other. As if fighting the Circle wasn't good enough, the 'kids' were fighting amongst themselves – hilarious gaming moment. 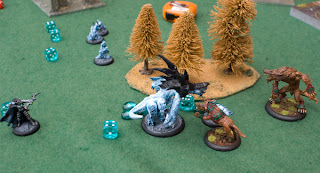 Eventually the Circle pack made it to my lines, albeit shot to pieces by Lylyth. I'd managed to get rid of one of the pesky dogs and things were looking up. However, another mistake from me left the Carnivean a little exposed… and in Hordes there is no forgiveness. 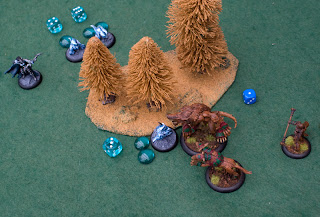 The fight raged on, on an abslute knife edge. Bull still had two out of three beasts but they were battered and bruised – I had three of my lessers, but they can't survive more than a single hit.

In an ironic twist, Bull managed to repeat my Fury mistake from earlier and his Heavy Warpwolf frenzied. Alas I had charged in with my Shredders which meant they were they closest models – he wasn't going to kill his own warlock today. One boosted attack later I was down a Shredder but he had used up his turn in doing so.

It was down to the last throw of the dice (literally). If Lylyth could survive a round of melee combat from Kaya she would have the advantage in the next turn – Kaya would have no Fury to spend – my last remaining Shredder would most likely kill the sole surviving Warpwolf…or Lylyth could take down Kaya.

Alas Kaya had other plans and hacked Lylyth down.

2-0 to the Circle of Orboros – congrats Bull, a very exciting second game. A lot to take away and reflect upon for next time.

After sitting down with my Legion book last night I discovered that I had been using the wrong spells with Lylyth. It would appear that not only did my Legion of Everblight starter box have a missing leg, but it also included the card for Epic Lylyth rather than Normal Lylyth.

These 'wrong' spells are geared towards a ranged army, which is not what the starter group is – I did wonder what the point of some of the spells were. The 'correct' spells should arm me with the ability to inflict much more damage on the Circle wargroup – I demand a rematch!