So my first game (or two) of Hordes happened on Saturday – you can read the narrative here – and I've had the rest of the weekend to swallow and digest the results. Continuing that metaphor, today's post is the satisfying belch followed by coffee and a mint, the only fly in the soup being me trying to eat said soup with a fork – using range-orientated support spells with a melee-based army.

For those who missed Saturday's narrative, my biggest post-game discovery was that my Legion of Everblight starter box had the wrong spell card in it – I had been given Epic Lylyth's spells instead of normal Lylyth's spells. This wouldn't be a problem except, as mentioned above, Epic Lylyth has developed her ranged combat abilities and passes on lots of ranged bonuses to her warpack. Only problem is the starter box warpack contains (virtually) no ranged combat ability so the spell set, and indeed her feat, were largely ineffective.

Putting aside the spell issue (along with any more food-related metaphors) how did things go? At the end of the day I lost two games. Game 1 I'm not too concerned with as we were just trying things out and making lots of mistakes – I threw my heavy Carnivean out front to see what would happen for example. That game got us through the basics to a point where we could feel more confident going into a second game. It allowed us to learn a little about what our respective warpacks could do which would allow us to play a (slightly) more tactical follow-up battle.


Game 2 is where things got interesting.

I had learned that Bull's 2-headed Argus has a crippling ranged attack that would reduce the defence of any model caught under the template and prevent running or charging. This had a devastating effect in game 1, which made them a priority kill in game 2. His Feral Warpwolf was a big hitter with a lot of wounds, as expected. When the three Circle beasts attack en masse I could not survive (as you would expect) so they had to be picked off individually. Kaya had an annoying teleport ability which, whether used offensively or defensively, can mess up your plans so you need to stay on your toes and have a back up. I came away feeling very positive – the game 2 loss came down (literally) to the roll of a single dice – and I've found you tend to learn more after a loss.


As for my own warpack. Lylyth has good ranged attack option with her bow and anything hit is 'marked' so additional attacks to the same target receive bonuses. This was a linchpin to my tactics and proved to be key. It meant I could spend Fury points to boost the attacks of my beasts instead of using them to charge into combat. With the 'correct' spells available to her Lylyth will become even more effective, able to strip defenders armour and even damage the opposing warcaster when she leached Fury from her own beasts.

My nasty looking Carnivean heavy warbeast can deal out some heavy damage, although we didn't see him in full effect. The reason for this is that he is relatively fragile in terms of Defence and, when hit by the Argus template attack, can be easily taken down. The Shredder warbeasts are like pawns. They have the ability to go Rabid and become quite nasty in melee, but against something the size of the Feral Warpwolf they don't do much damage without a lot of boosting. They also die very easily, never surviving more than one hit, so you have to choose your moment to send them in and try and make sure they kill whatever they attack.

I have already acquired a number of additional models for my Legion of Everblight army, however I am tempted to stick with this starter warpack for a while as I think they have a lot of potential. They have the ability to kick out a lot of damage, but they can't take it so I have to be the one to initiate the charge. The warpack's ability to pretty much ignore forests makes that kind of terrain fantastic for me – having the huge Carnivean hiding behind a forest is great, the enemy unable to see or attack him yet he can see and charge them as if the forest isn't there, amazing.

I don't know if it's because we played a few games of Warmachine a while ago (6 years or so!) but I found the Hordes rules very easy to learn. After the game 1 walkthrough the stabilisers came off and I felt in control of my own destiny. We're still at a basic level – haven't touched power attacks which will open a whole new range of destruction – but I feel like we hit the ground running. Things are destined to get a lot more brutal in the coming months, even at this starter level.

I learned a fair bit about the Shredders and I'm learning to love them. I did initially think they were too lightweight to deal with my Circle opponents but that is only the case head to head. By tweaking how I use them they can be quite deadly and I intend to prove that very soon.

The Carnivean didn't give a great show at the weekend. He is such a target due to the potential damage he can do that he gets battered as soon as the enemy is in range. Again I have to change my thinking about how to use him – he is not a straight up tank because he can't take sustained damage but if I can get the drop on my enemy he should be killing stuff with ease.

My warlock Lylyth is amazing. She has a great set of spells (it turns out) and she has a reliable ranged attack. She's not great in combat and she can't take more than one big hit (as we saw in game 2) but if she ends up in melee I've played her incorrectly and exposed her too much. I hope she is going to shine and I am confident that she will be orchestrating the downfall of the Circle of Orboros soon! 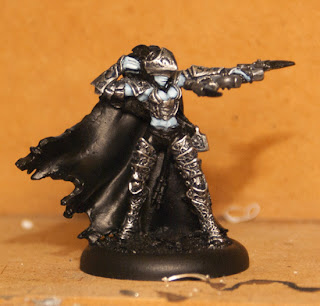 Then there's the models. I am loving the models. I was out of my comfort zone having to paint a 6-model crew in time for Saturday's game but, now that I can go back and paint details at leisure, things will get more enjoyable. I have also vowed not to field any unpainted models, basic paint job minimum. With several new models already vying for paintbrush attention this will make a pleasant change from the Malifaux models for a while.

I hope to have a painting-related post later this week – post number 200 for the blog – to update how the crew is looking and maybe a sneak peak at some of the upcoming stuff.

…I also hope to be adding more video to the blog after my test clip.