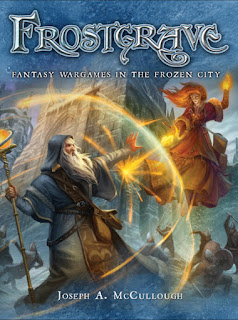 An impromptu gaming morning today saw our first foray into Frostgrave. It's been on the radar since the back end of last year, but today myself and Bull finally got to give it a go.

Despite loads of reading up and warband prep earlier in the year I was completely unprepared for today so had to write out my list and make spell choices on the day, whilst Bull sat patiently waiting with his printed out spreadsheet and fully painted models.


Eventually we got stuck in to our opening game and things plodded along in a rather uneventful fashion. Bull sent his Apprentice's group forward to grab a token in my half of the board so I decided to let my Archer take a pot shot… miss. My Apprentice then had a go at casting Bone Dart – a suitably Necromantic shooting spell – at the rather brave, if foolhardy, enemy. Spell cast successfully and I rolled to shoot. After a little mental arithmetic it appeared that I had killed Bull's Apprentice stone dead! That sent shockwaves across the table – shooting is devastating if you roll a reasonably high score, let alone a 20. Everybody dived for cover next turn to avoid a similar fate.


The game rumbled on, a few shots pinging across the table here and there with with no more drama aside from one of my Thugs being taken out by Bull's Ranger. We'd each grabbed three lots of treasure and retreated to our respective table edges. I had contemplated making a charge into the enemy lines to mix things up, but had second thoughts and we all lived to see another day.


The after-game exploits are equally interesting as the roll for casualties, loot and experience related stuff. We got to choose our base and equip it, employ new bods and prep for the next game. All the killed models returned to their rosters none the worse for their untimely demise and we were ready to go again. Bull had managed to accumulate an enormous amount of money due to some good loot rolling and his new-look warband was very well equipped. I added a couple more Archers but nothing more, despite gaining an extra level of wizardry over Bull which made little impact.

We went into game 2 and this was even more cagey, with brick walls and fog banks being cast all over the battle. Some long range fire was exchanged – Bull lost a Ranger and I lost a Man at Arms and a couple of Thugs. 90 minutes later we were done with three more treasure tokens each and a lot of dice rolling to do. 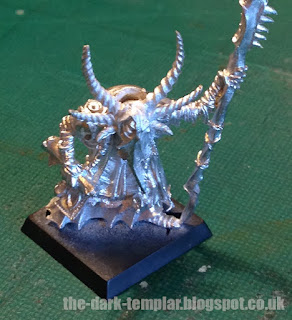 So there we have it. Our respective warbands are established, both maxed out in number just needing better gear. Despite being a couple of wizarding levels higher than Bull, it has little impact in the game. Bull's mass fortune on the other hand speaks volumes, and he is now in a position to buy magical items and potions and really tailor his warband.

It's an interesting game with an exciting premise. I found shooting combat rather unbalanced due to the use of D20s – you either did almost no damage or wiped your target completely from the face of the earth, there seemed to be no middle ground. It's also a shame that the rest of your gang don't get rewarded for their exploits. It all comes down to your wizard and what he accomplishes in-game. The only problem with this is that he is the one character you're trying to keep safe and out of danger!

It's still early days for Frostgrave. Bull is very keen to get stuck in more and I'm interested to see how it develops. At the moment it's all feeling a little unbalanced to me, but we haven't even seen melee combat yet – our board was a little too open for that – so there's plenty more yet to experience.