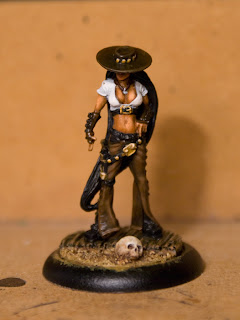 Hot on the heels of her brother Santiago comes Miss Ortega herself. She's already proved herself in the three or four games she's starred in so far, it was only fair I showed her some love.

As you can see she's not there yet, but coming along nicely – hope to have her finished by the weekend. Then I need to finish off Nino and the Austringer, which shouldn't take long. Then I guess I'm back to the poor old third Death Marshal who has been constantly passed over for paint.

I look forward to the day I no longer have to paint anything brown!

For those people wondering, the base is one of my Boardwalk resin bases with a metal skull added for effect.
Posted by The Dark Templar