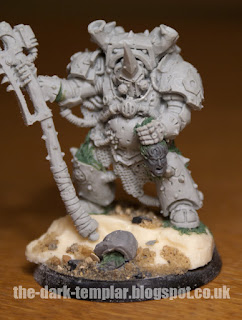 I've kept my cards pretty close to my chest in the run up to this coming weekend's battle, trying to keep Bull and his Dark Angels unsure of what exactly they would be facing. I've weaved my bit of pre-battle banter and fiction, implying that I would be taking a Terminator Lord of some description. That was until yesterday!

Sunday's post (I never post on a Sunday!) revealed that the suggested HQ choice for the game had been usurped and that the big guns were coming in his stead. I spent a lot of time wondering what list to take and one of the biggest decisions was always going to be the HQ choice. After a lot of soulsearching (which I'll go into in another post) I decided to take Typhus, despite not owning the model. 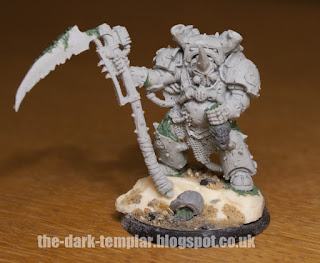 Typhus is now part of the (in)famous Finecast range from GW and this would be the first time I had used the product. I have to say it's very strange stuff and not very nice. At times it feels like rubber, and elements of the model (e.g. Scythe blade) distort very easily and are quite difficult to correct. It is much easier to work with than metal – this came in very handy as I wanted to remove the Nurgling from his right thigh and pouch from his left leg, which took seconds. Unfortunately I am not able to comment on the casting quality as a lot of elements I thought were bubbles and miscasts could actually have been intentional Nurgle rot on the original sculpt. Bottom line from my perspective is that the product worked reasonably well for this example but I won't be rushing out to buy more.

I was never going to stick the model together as it came off the shelf, so a little converting was required. I cut his left hand off the scythe and stuck the two remaining pieces of his weapon together. His right hand was then attached in a more confident 'at ease' angle – he's not the kind of bloke who cowers or apologises now is he?! 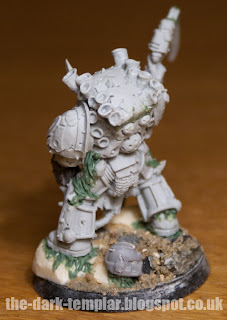 I was intending to have his left hand casting a spell, but the angle of the arm and whole body stance prevented this being a viable option. Bull likes to have provocative debris on his bases – trophies from previous battles to rile the enemy – so I decided it was time for some payback. I added a severed head to the left hand and a few helmets to the bases – a good day's work from the big man – hopefully this will be suitable payback.

I also noticed that Typhus is some kind of pygmy, falling several millimetres short of a regular Chaos Terminator. Clearly this was not acceptable, so I added a resin rock to his base and had him stand on that – a good head height clear of his underlings.

And that was as complicated as the building process got. Quite a breeze compared to most models. During the rest of this week we will see how he was painted and maybe a bit of game theory behind his character.