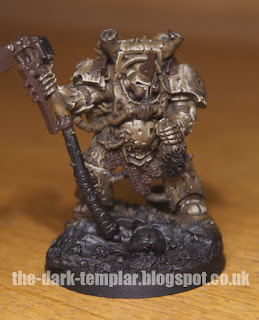 In the last post we saw Typhus just before his black undercoat; now it was on to some colour.

I've developed the scheme for my Plague Marines over several weeks and models, tweaking each time. I wanted Typhus to follow the scheme but rise above it so that he could be picked out as the leader in a sea of rotting plague marine armour. It also had to be relatively straightforward as I didn't have as much time as I'd have liked to finish him, not if he was to appear on the battlefield in all his glory.

I started with a solid coat of Burnt Umber followed by a couple of thinner coats of my Vallejo British Uniform, which forms the basis for my scheme. A couple of washes of Devlan Mud later and he was starting to take shape.

At this stage I move onto highlights. I took the British Uniform and added a tiny bit of white to pick out the armour after the brown wash. I then progressively add more white to the mix until I'm painting an off-white colour to the highest points of the model. I used a striped effect when painting; as this builds up with each layer of paint it helps the armour look worn and old.

Once happy with this part of the model I move onto the metal parts, starting with a coat of Scorched Brown (see photos). 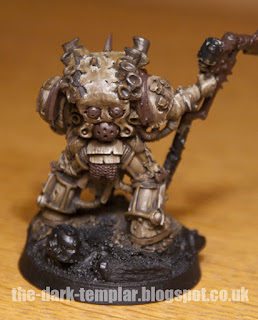 I then dab Bestial Brown using an old brush in an adhoc fashion to give a mottled, rusting effect. I then repeat the procedure with a metallic paint, in this case Vallejo Oily Steel. This layer is often overdone so I usually go back and dab additional Scorched and Bestial Brown to take the shine off it. Using watered down paints at this stage can give some interesting translucent effects on your rusty metal.

Now I start to paint in some of the detail basecoats. I use Dark Flesh on the fly icon and his guts, as well as any boils developing on the armour plates. I take a timeout and give the whole model another Devlan Mud wash.