A Quick Visit To Malifaux

With October truly being the month of Nurgle on this blog it was about time for something less diseased.

Prior to my game of 40k versus Bull at the end of November, I have a gaming evening with my friend Chris in a week's time. Whilst a complete newbie when it comes to the world of miniature gaming, Chris is a sci-fi & fantasy veteran with many books, tv/films and video games read, watched and completed. He is quite a font of knowledge and will often throw facts and observations into a given conversation. He is the ideal candidate for recruitment! At the time we discussed playing an introductory game I was heavily into Malifaux so it made sense (for that and many other reasons) to start there. 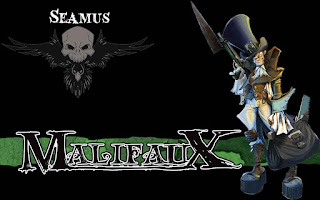 However, my Malifaux collection consists of lots of Guild models and Kirai, so I felt a new master was needed that would be easier to learn the game with. I decided to get Seamus and use him and Lady J for our intro games – the classic match up!

Rather than go the route that myself and Bull went when learning the rules (use all your models and fight a 4-hour game) we're going to have a handful of smaller games, adding models and rules as we go. This also means I don't have the paint up the whole Seamus crew just yet which, given the current painting schedule, is a blessing.

If I'm really honest, the time pumped into completing the Charity Project turned me off from painting Malifaux figures for a while and diseased Nurgle Plague Marines have been the perfect antidote (ironically) to my painting malady. I won't be spending anywhere near the same amount of time on Seamus so this will be a test – can I speed-paint Malifaux figures?