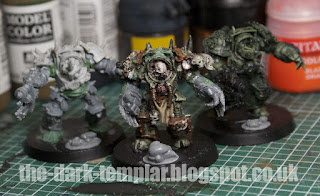 The Face Of The Enemy…part 1

The Forgeworld Terminators look awesome and capture the essence of a Nurgle infested marine in exquisite detail. However, they give a false impression of how Nurgle Terminators work on the tabletop. Unfortunately, they are not Plague Marines in Terminator armour – which would be superb – they are simply regular Terminators with the Mark of Nurgle.

Terminators generally have the same stat line as normal space marines, the big exception being that their armour save is now 2+ and they have an invulnerable save of 5+ for anything that bypasses their armour. With melee weapons now having an AP stat and most Power Weapons being AP3, the Terminators, with their 2+ save, have just got a whole lot better. They have always been expensive pointswise and I've personally never been able to justify their inclusion based upon their return in-game. 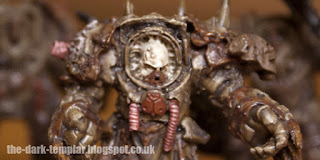 By giving your standard Chaos Terminators a Mark of Chaos and dedicating them to a specific god, you can improve their stat line in some way. For Nurgle Terminators you get +1 Toughness, making them T5. Alas, they don't get "Poisoned" weapons, Blight Grenades or "Feel No Pain" like the Plague Marines do, in all other respects they're just Chaos Terminators.

In fact, if I'm being honest, the Mark of Nurgle is probably not the best one to give a Terminator – Khorne and Tzeentch are definitely better – and that's what I love about this army. Sometimes it's theme and strengths actually turn into a negative, making tournament-play tricky. However, I've done tournaments and now I'm enjoying the themes, negatives and all!

The role these Terminators will play is that of main assault unit. They may be limited in number but their improved Toughness should allow them to mix things up with the basic Dark Angel troops and hang around long enough to survive. Any Power Fists or Power Axes in the DA units will be carried by Veteran Sergeants so should be able to be dealt with by the Champions challenging, one way or another.


WHY DID I TAKE THEM?

As I said, during my years of playing tournaments, where cost vs return often dictates your choices, I could never justify their inclusion. However, the Forgeworld models are so fantastic that when I decided to finally take the plunge and do a Nurgle army, the Nurgle Terminators were an auto-include. The visual image they project of heavily armoured killing machines that are hard to kill, daemonically touched and oozing filth is the stuff of nightmares. Yet, in my one game with them so far they managed to Deep Strike scatter off the table, taking no part in the battle whatsoever – I'm thinking things can only get better!
Posted by The Dark Templar