A Tale of 3 Painters… Models Built!


With 1st August fast approaching the pressure was on this weekend to get the six (yes…six) models built in time to be posted to my fellow painters on Monday morning.

For the most part I have used cobblestone resin bases by Fenris Games that I had – you may have seen them in my early Malifaux painting pics, my Lady J's crew uses the same ones.

Whilst on the subject of Fenris Games, I was lucky enough to get an email from Ian at Fenris on Friday to say that they are going to donate some bits to our auction, so a big thank you to them. 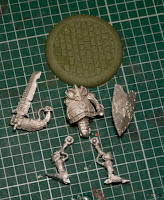 I built the bigger models first, starting with the Guardian – an easy build but most limbs needed pinning. I got terribly excited and gave him an undercoat whilst waiting for other models to dry – jumping the gun a bit!

The Hunter was similarly straightforward but felt the need to pin a lot, including the replacement of the harpoon shaft that was bent beyond a joke. This model is on a huge base but manages to look right on it.

Ryle was a very easy build but I pinned his arms to be sure. Things were going well at this point – I should have known better.

The Hoffman body was attached to his base with little effort involved, however his harness is very fragile. Whilst drilling pinning holes in said harness the limbs were bending all over the place and I was petrified on something breaking off – the metal is very thin in places. Luckily it all stayed in one piece. I've kept the harness separate at this time so that the model can be painted more easily then stuck together once complete.

The Watcher was a two-piece model (body and wings) but given his nature to fly I wanted to give his a little more height. I hacked off the top of some Warhammer ruins which fitted perfectly on a 30mm base. I used a plastic base (rather than a resin one) to aid the sticking process – I could use plastic glue instead of superglue – and I wanted the capacity in the base to add a penny to help weigh the model down. I pinned the two parts of the model together then attached him to the top of the plastic ruin.

With just the Mechanical Attendant left I was in the home straight. Then disaster. Whilst sitting in his blister pack, the mechanical arms of the Attendant had become quite bent, to the point of facing the wrong way. As I slowly twisted them back into shape the two arms above his head snapped off!

The metal is so thin at these points I have no idea how to attach them in a way that will not make them vulnerable in the future – will have to ponder that one a little longer.

The models were posted out this morning – off we go!


What's A Tale of 3 Painters all about?