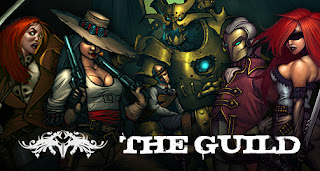 As I mentioned earlier in the week, my interest in Malifaux has been piqued and I've decided to have a look through my Guild models to see how things stand at present. 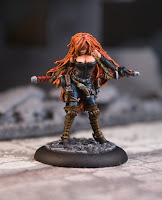 Lady J was my first love but only managed a couple of competitive (ie. not still learning the rules) games before being replaced by a younger, faster colleague. Just prior to putting Malifaux on the back burner I did give J another look, compiling a list that took advantage of her abilities more than I had done previously – though I didn't get to implement any of those ideas.

The rest of her natural crew – Judge, Scales and Death Marshals – are all painted bar a solitary DM. The model that came immediately after this box set (The Executioner) is also painted to a good standard but has never managed to deliver in-game. In contrast the Austringer delivered in every game and became notoriously painful for opponents – the model was never finished 100%.

These were always my beginner models and they need to be looked at again now that I have gained a lot more Malifaux gaming experience. 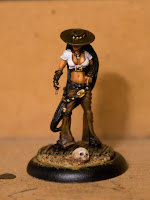 The second box set I bought was the younger, faster Perdita Ortega. She was a revelation when I started out – her speed and abilities allowed her to win many early games almost single-handed. Combined with her Nephilim Totem she was even better, and these two models became the foundation of many games. The addition of a painted Santiago Ortega made the lineup more reliable and added resilience. My semi-painted Nino added a long range threat, but was never allowed to fulfil his potential often being taken down early on.

As for the rest of the Ortegas: Papa never saw the battlefield but saw some paint earlier this year; Francisco never delivered as an unpainted model so sat idle in the case until being recently resurrected for my Newbie Guide to Painting. He is still waiting to be finished. Abuela participated in a game or two but was always considered too expensive for what she achieved so still lies unpainted.

Although she became my go-to master for many weeks, my Sonnia Criid model was never painted. This is quite a travesty as she always did quite well. Samael Hopkins never saw paint either – another model with a lot of promised but very expensive and rather unreliable in-game.

The Witchlings on the other hand usually did quite well – although they too remain unfinished. The fact that I could summon more mid-game meant they became the mainstay of lists against Rasputina. On a couple of occasions I even managed to turn Rasputina into a Witchling which always gave me a sick sense of satisfaction. Even when used alongside other masters, they proved to be a solid choice of grunt – much moreso than the Death Marshals did for the same price.

Towards the end of my time fielding the Guild I went back to Perdita and added a Guardian (from the Hoffman set) into the mix. Although he was never painted beyond an undercoat he seemed to perform well.

I also purchased the Sonnia Avatar, and posted about its construction (as painful as it was). Alas she too never saw paint or play time before disappearing into the gaming case.

In addition to all the models listed so far for The Guild, I also have a host of models that didn't even leave their box/clamshell…

The remainder of the Hoffman box set sits unbuilt and unexplored. I like the idea of this master but he's not a priority at this time. In support of this I bought the Lucius box set (for Ryle) but again, the models sit undisturbed since arriving. There is also a couple of extra Guild Guard, Guild Hounds, Drill Sergeant and Mechanical Attendant not to mention a Peacekeeper still in his box. Even by my standards I'm rather embarrassed by the amount of unused metal here. They're all lovely models who need some TLC, but if my interest in Malifaux wanes they will be straight onto Ebay which would be a shame.

My problem now is that there are new Guild models being made available as Wyrd finishes off the Book 3 releases and moves onto Book 4. The Warden in particular looks like a very good investment but it'll have to wait until I can justify the addition – not likely any time soon given the length of my current wish list.

I think the solution is to scale back on things, like I have with 40k. Get a solid group of models together, that can crossover when necessary, and get them all painted to a decent standard. Let's see how that goes…!
Posted by The Dark Templar