I may have mentioned recently that I am enjoying my time painting Legion of Everblight the most at the moment. I can't explain why but they give the biggest buzz and I seem to get satisfactory results quite quickly. 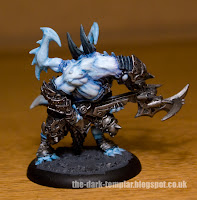 I am even closer to finishing off the Nephilim Bolt Thrower than when the above pic was taken, which will leave me with 2x Shredders, a Nephilim Soldier and Absylonia still on the painting table. I also have my Angelius who is waiting for a little quality greenstuff time before seeing paint. Waiting in the wings I have Legionnaires, Striders and a Deathstalker – as well as a plastic heavy beast kit – but they can wait until I've had a few more games and moved beyond starter box status. 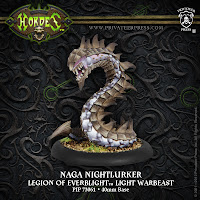 However, that's not to say that I don't have my eye on additional purchases for the army. The soon to be released Nightlurker is definitely on the radar. The model looks great, will be easy to paint now that I have my scheme worked out, and has some great rules. 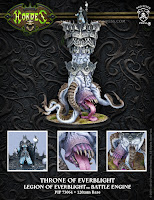 With my birthday coming up in late September I have my heart set on the Legion's Battle Engine – The Throne of Everblight! That is a monstrous kit and, regardless of how it plays in-game, it looks like an absolute blast to build and paint. I'll need to sort out my airbrush situation and storage solutions but that would be worth it. 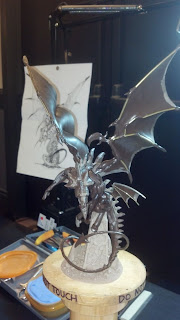 And as if that wasn't big enough, there is the upcoming Archangel Gargantuan!… please Santa?!

Rumoured to be being released before the Gargantuan rulebook (due in Spring 2013) this looks like it could be the ideal Christmas present for me. I've always wanted to paint a dragon, but the Forgeworld ones have never done it for me and the plastic Warhammer ones were too small. This fella is a true beast and would be a real challenge. However, where I would keep it I do not know!

As you can see, the kit is still being built so we'll have to wait before the final thing is revealed.

So that's where we are with Legion. Hope to have some new photos after the weekend, although hobby time will be scarce.
Posted by The Dark Templar