With the recent release of Warmachine: Colossals and the expected spring release of Hordes: Gargantuans, gaming in the Iron Kingdoms is definitely getting bigger.


One of my favourite things about Warmachine/Hordes is the Warcaster/Warlock dynamic. They really are the leader of your army, pulling all the strings,  and the game is over if they die. In addition there are different versions of warcasters as their character develops in the background story. These alternative versions aren't necessarily more powerful, just different.

When it comes to my Legion of Everblight, I love Lylyth. She may not be the best Warlock for the faction in-game, but I love the character, the background and the models. Such is her draw that I own all three sculpts – original (primal) pLylyth, alt pLylyth and (epic) eLylyth.

With the recent info coming out of the Privateer Press Lock & Load convention I have the possibility of a new model to add to my collection. As part of the Gargantuans release it seems we are now getting Lylyth 3 who, instead of being on a standard 30mm base, will be on a 120mm base and considered a Battle Engine!


Yes, we will shortly have a version of Lylyth on a sleigh – ho, ho, ho! I like the idea for this (although I would have preferred a Raptor mounted version of Lylyth first I think) but the practicalities seem odd to me.

First of all in-game. As I mentioned, if your 'caster gets killed the game is over, but here we have a caster on a 120mm base rather than a 30mm base – not so easy to hide and, improved defences aside, does beg the question of how easy it will be to keep her alive.

There's also rumours of a Khador warcaster actually being a Colossal – at what point do we reach "too big" for commander models?… when they're physically the biggest model on the table?

Then there is the financial cost. The current Battle Engines retail for something in the region of £50-60 and the Colossals closer to £100. Would you pay that for a warcaster model that by definition will not be used in every game and, if her stats make her too vulnerable, hardly used at all?

Of course you could always look upon it as simply purchasing a lovely model to paint, but it's going to have to be pretty stunning to justify a price tag of £50+. 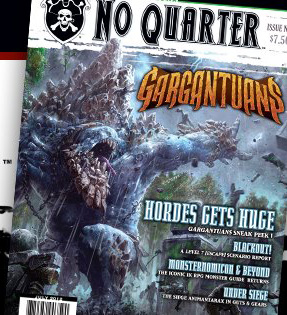