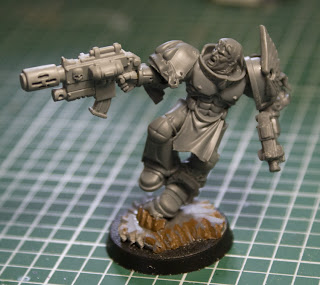 So, with progress made in part 1 now complete and thoroughly dry I looked at shoulder pads. The right shoulder pad, straight off the sprue, has blood drops as per the rest of my BA army with a decorative scroll to indicate the good captain's position. 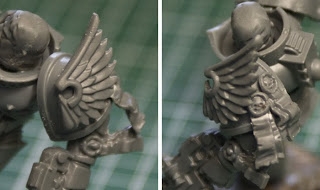 The left shoulder pad had to be a little more special. I wanted something in the same vein as the metal Tycho, but not exactly the same. I found the blood drop/wing element on the DC sprue and added it to a plain ridged shoulder pad from a Tactical squad. I then took purity seals from the same DC sprue and glued them into the space behind the wing. I then tried out the positioning of the head and, once satisfied, glued into place.

I'm very happy with the way things are going so far. However, one issue I have is that the two DC purity seals added to the shoulder pad now clash with the seal on the arm – it just looks a bit awkward to me.

Once I've added some grenades/pouches I'm pretty much done with the plastic and onto the greenstuff stage.