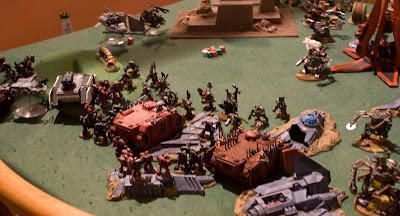 Before all the fun at Salute last Saturday I had a rather important rematch against Bull's Orks. This time I had a new codex, some new models and an ace-in-the-hole tactic to try out. Bull proclaimed that he had tweaked his list from the last time, losing a couple of the Deffcoptas and having a Tankbusta unit instead – complete with Bomb Squigs. Given I had 9 vehicles, this was not the best news I'd heard all day, still you can't be psyched out at this stage.

My army list was as follows, with the army made up of BA, Dark Templar and some Chaos tanks:

Bull won the roll and elected to set up and go first, expecting me to charge across the table as quickly as he would and there to be an almighty dust up in the middle of the board. But I had other plans.

I held EVERYTHING in reserve. Now, this goes against my ethos from tournament days, where I went out of my way to eliminate as many random variables as possible (given it's a dice-based game). Needless to say Bull was quite stunned, and not quite sure what to do. So, being an Ork, he charged across the empty board anyway.

After two turns of running, he was almost in my deployment zone, and already had his reserved Kommandos on the table. On my turn 2 my drop pod dread and HS Predators turned up – dread landing behind the Ork lines and taking out a Killa Kan. The Preds charged in on my left in unison tank-shocking the two awaiting Deffcoptas, one failing its morale check and the other gunned down by the speeding tanks. In reply the Kommandos charged into the Preds (with a single klaw between them) and the remaining Kans charged my Dread with the Deff Dread moving up to support.

Next turn everything except the Baal arrived, and the transports swooped into the Ork mob and marines jumped out, letting rip with every gun available to them (top photo). 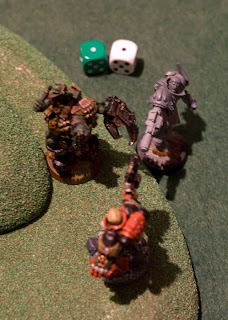 Anyway, long story short – the marines survived the Waaagh and cut down the Ork mob. Tycho went up against Snikgrot, killing him with little effort. He then went on to support the Tactical sergeant against the remains of the Kommandos, downing three and surviving two rounds of klaw attacks from the Nob. The Nob then pulled off a monumentous roll, having failed his morale check pulled a Gentlemen's Ones out of thin air for his mob size check, when anything else was a fail-and-die (above pic). 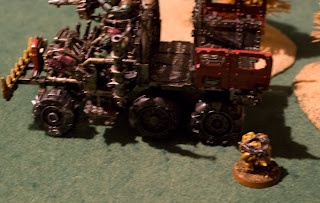 By this point the marines dominated, losing just the Tactical marines and a Rhino. The Baal arrived on the right flank and took out the last Deffcopta, and was charged by the Tankbustas and their Squigs. Unfortunately one of the squigs got confused and charged his own truck, immobilising it.

That was pretty much it as far as the action went – Bull conceding and the postmortem chat began.
Posted by The Dark Templar