It's now a couple of weeks since I bought the new Blood Angels codex and I've finally had time to read and absorb its contents. I've got so many ideas buzzing around my head right now that I'm in very real danger of falling back into my old ways of starting a million projects all at once, spending a fortune, then getting nothing finished.

I also read that the 5th Company are known as the 'Daemonbanes' ...how awesome is that, out of all the BA companies I choose to paint it turns out to be the ones with a daemon-related grudge. You'd have thought our Hailed vs Hated idea was thought up before the codex was written!

Anyway, work has taken up most of my time since getting back from holiday, and I've had precious little time to progress anything in the last week or so. I having to work today in fact to finish a brochure pitch, so am taking fifteen minutes to get something up online so you folks don't think me too slack. As you can see above, I have managed to put some paint to plastic/metal and with another game due to be played this Friday I thought I should add something new to the army list. 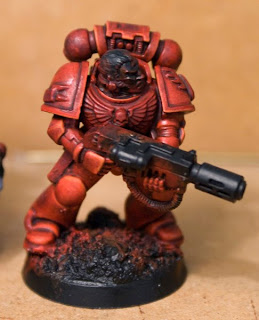 The melta guy mkII is going to be inducted into a tactical squad and, after his predecessor made a brief if telling appearance in the last game, I though it only right he should take to the gaming table this week. He's been basecoated, washed, highlighted and just had his second red wash added so ready for some details. I'm getting better at blending the highlights with this current set of models – if I could just spend more time on them I think we would see a big improvement in painting quality. I have my hopes pinned on my Tycho conversion – going to spend a long time painting him properly. 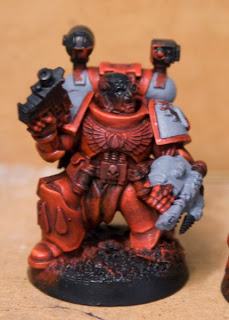 My Sanguinary Priest now has some colour too. He will definitely be making an appearance on Friday, so I will try and spend more time on him this week. Like the melta guy, he is done with his armour and I've moved onto the white – a colour I've never really painted before. At the moment it's only a Codex Grey basecoat, but I shall move onto the white later this week. 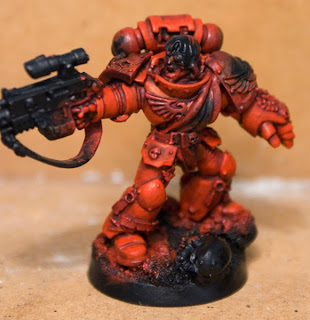 And finally my Veteran Sergeant. He's just had his first Blood Red highlight this morning, with two more highlights to come before his final red wash. I really like this model, after saving him from his Dremel accident, and he will lead a Tactical squad on Friday. I have also made him my first nod towards the Hailed vs Hated conflict...

The eagled-eyed amongst you may have spotted the Chaos icon on the base in his last article. I have now added a couple of Chaos marine heads to emphasise the individual's hatred of the Arrugginiti and his involvement in the fighting.

Things have been very one-sided in this conflict so far, with the Blood Angels relegated to bystanders whilst the Chaos daemon machine commits acts of increasing hatred and carnage against the holy brethren. Once there is a respite in the other theatres of war we are involved in, the Blood Angels will make their feelings known. You have been warned, hahaha...
Posted by The Dark Templar