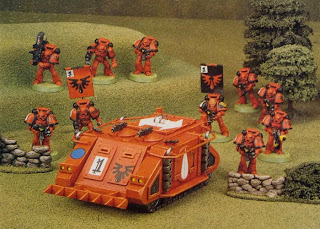 A good three months ago I talked about the White Dwarf article that inspired me all those years ago and made a lasting impression that sees me building Blood Angels as my army of choice now. Having been 'home' to the North West over Easter I retrieved some of my old White Dwarf mags (much to my wife's dispair – "I love you darling, they're going to live in the attic I promise"), so I thought I'd take a couple of snaps and share these models with you – given that everything else is currently WIP at the moment.

The top image shows a Tactical unit, broken down into squads, and its Rhino. What you have to remember is that this was back in the late 80s and I personally had never seen a 40k 'army' or even complete units together, only ever individual models.

The shot above is of (half) a Devastator unit, with a converted heavy bolter guy. The plastics themselves are obviously from the legendary RTB01 set, but to see them painted so well was amazing. The blue helmets of the Blood Angels Devs, even in the current codex, make me really want to get a unit of these together, even if they aren't the best HS choice available. 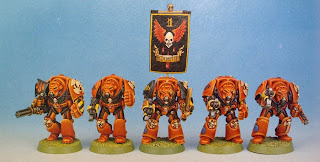 These Terminators were some of the best painted models I had ever seen at the time. It was from this tutorial that I learned to add blue into the mox when painting black on models, to get a richer colour. Whilst they may pale in comparison to painted examples today, I still find them inspiring because as a unit they look so awesome together.

And finally the man himself – the Blood Angels Captain, labelled in this article as Tycho. Long before I had heard of NMM, this was a revolutionary way to paint 'gold' armour to me. I didn't have the skill set to achieve anything like this then, but my hope is to get close to this when I finish my Tycho conversion and get some paint onto him.

For anyone interested this article came from WD139 and was followed in WD 141 by a Blood Angels/Eldar battle report – the first time I had ever 'seen' a game of 40k played, as well as the first time I saw a complete army photographed together!

As you may know I have my next fight against the Bull's Orks on Friday night, prior to spending Saturday at Salute 2010 at the London Excel Centre. I have my army list finalised now and continue to dab paint on models – although there will be an embarrassing amount of gray plastic on show. 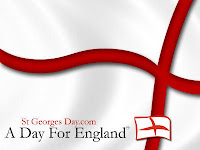 However, my time is currently being taken up creating a fancy dress Crusader outfit for my wife, who is hosting a St George's Day dinner while I am away on Friday. I have gone through a lot of thick card and silver spray so far, and am in the process of completing a cardboard sword for her.

On top of this, she is borrowing some of my Warhammer scenery for a medieval-themed game of duck shoot – I am currently building a plastic catapult with which her guests can fire paper mache rocks at targets sitting on battlements.

Of course I'll have to thoroughly test the game mechanics before I leave....!
Posted by The Dark Templar