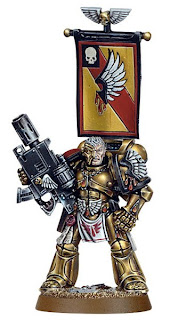 I love the Tycho model, I always have. Even when he was an amalgamation of Tycho and Dante, simply known as a 'Blood Angels Captain' I loved the armour and the stance. However, anyone following this blog will know my feelings on miniatures 'at ease', so as early as December last year I had decided to create my own dynamic take on this classic character. 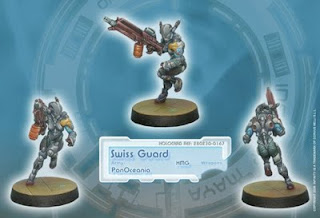 I have been paying more attention to GW competitors' websites recently, taking in some of the movement and action captured within their miniatures – in particular Infinity and Mercs. A picture of how I wanted my new 'action man' Tycho quickly formed. Then with the new BA releases, Games Workshop did me the ultimate favour of creating a plastic kit containing Tycho-like armour. This saved me a lot of time and work, so I decided to keep the conversion as simple as possible. 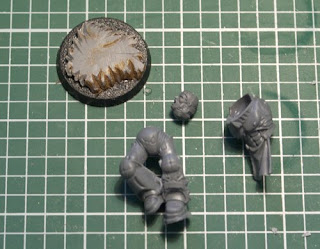 First of all I picked out legs and chest from the SG kit and a head from the DC set. I put my standard bit of plastic scenery on the base and, after some trimming, glued the legs at a 45 degree angle. 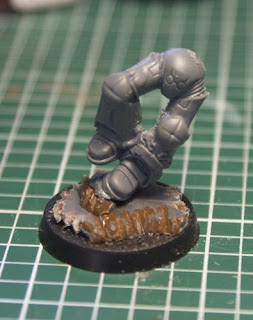 With the tabard attached to the chosen chest piece I didn't have much wiggle room when glueing into position, but it seemed to sit nicely in place of its own accord. Once dry I took the DC power sword arm, cut off the sword and added the Commander's combi-melta. At the shoulder end I cut it square and added a small bit of circular sprue to add the length lost in trimming. With that arm secured I added a DC bolt pistol arm as it came off the sprue. 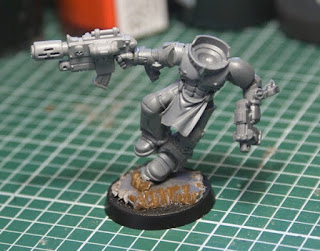 At this point I added my, now standard issue, penny piece to the base for weight and left the whole thing to dry for the remainder of the day whilst I moved on to picking out shoulder pads. 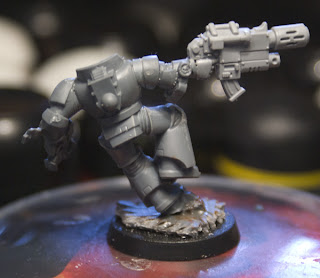