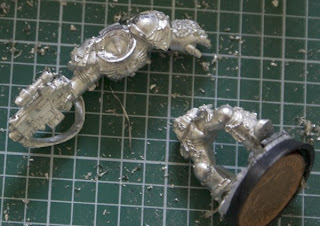 After a week of visiting family, away from my work tray, I truly had withdrawl symptoms. The purchasing of the new Blood Angel codex did nothing to abate the thirst for creating new models for my army. I really thought I was going mad. I have stopped myself from purchasing any of the new kits in an attempt to keep things sensible and give me a hope of finishing the models already on my table – not to mention the financial black hole that a new army can become. 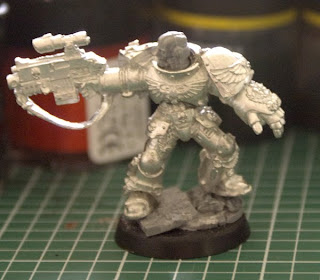 So I sat down this afternoon eager to get stuck in. After building two more Assault marines, to complete the squad, and basing two other marines, including the Sanguinary Priest, I decided to finish building a Veteran Sergeant with Power Fist for my Tactical squad. He was already on a base, but I decided at the last minute to chop his head off – all my Sergeants have bare heads and it's a trend I wanted to continue. I dug the Dremel out of the attic and got to work. Unfortunately the vibrations of the drill (I'm assuming) combined with poor cast quality caused the model to fall apart, almost perfectly at the waist, in my hands!!! 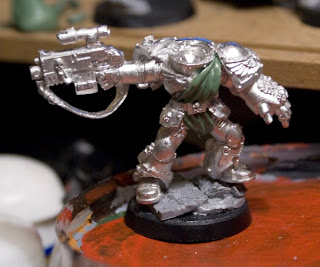 After finishing the drilling I tidied up the break and pinned the two halves together. However, it did still look a little weak and I was just not convinced that it would hold under the pressures of gaming. I decided to sculpt a greenstuff tabard into the model – all my BA sergeants so far have a tabard of some description so it fitted in well. I took a triangle of greenstuff and placed it across his chest before using my sculpting tools to shape it. Similarly, I took a small bit of putty and added it below the belt. The tiny bit of greenstuff I had left was added to the back of the model, and in all locations, was pushed around the break to strengthen it. I'm very happy with the final result and just need to choose a new head for the model.
Posted by The Dark Templar