After a quick visit to the Cavalier 2012 show in nearby Tonbridge, myself and Bull negotiated the 'Annual Tunbridge Wells Half Marathon' disruption of the traffic to get back to his place and get a game going. Needless to say I took the scenic route and sat in traffic for an hour!

It's been quite a while since Bull last played Malifaux – against my Perdita crew – and I am still learning the finepoints of Kirai, so this was not going to be a quick game. He took the same crew as he did back in September, I took a fairly standard and by now familiar lineup. 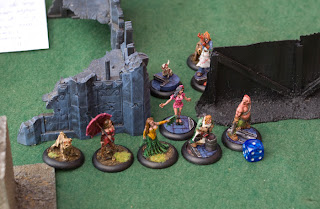 We flipped for Strategies, Bull got Destroy the Evidence and I got Contain Power. There was no realistic way that Kirai was going to kill McMourning making it unlikely to get 4VP for that, so I had to choose Schemes that were achievable. I chose Bodyguard and Breakthrough – Bull had to come to me to destroy the Evidence token so was unlikely to have anyone remain behind; he was also unlikely to be able to kill my master without a concerted effort given his lack of experience fighting Kirai. Bull chose Grudge (or could have been Kill Protegee) on Datsu-Ba and Stake a Claim. 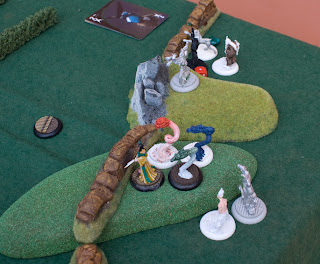 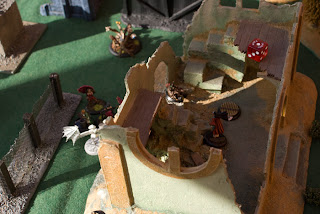 The First turn started as expected with McMourning and his dogs killing each other to create enough bits to summon a Rogue Necromancy. On my side of the board the dog and merc hit each other to set up Datsu-Ba's summoning tricks. Unfortunately the Merc decided he didn't want to die today and took three turns to go down. 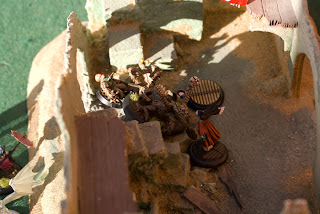 The Gunslinger headed straight for the Evidence token in the middle of the board; an Onryo summoned by Dasu shot him and he was finished off by a lurking Shikome who then moved off to the side to intercept Sebastian and the two Belles. The Necromancy mugged the Onryo and the fighting had begun in earnest. 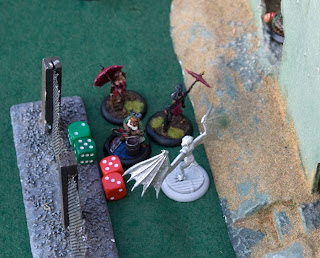 Next turn the Shikome battered Sebastian, including a couple of poison tokens, before taking quite a few hits back. However, luck was to be on my side with the cards today and I flipped sufficient cards to prevent death. She was swirled back to Kirai and healed before being sent back in to face the Necromancy. I also summoned Ikiryo to the centre to take down the three headed beast, but McMourning saw the danger and came steaming in. 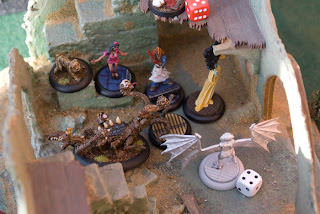 This set the tone for the game and the ruined church became a killing ground and as fast as I could hurt McMourning the Nurse just healed him, and as fast as Bull killed my Spirits I summoned more. It was a war of attrition he was unlikely to win without cutting off the source, and after a couple more turns of mayhem and death the Necromancy dropped, followed by the Nurse – Datsu-Ba had been swirled into the mix and managed to use Harvest Sinners on the grouped enemy, including a trigger hit against McMourning, and this broke the back of Bull's resistance. 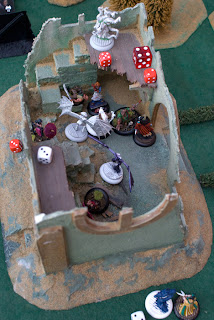 Having already killed 2 Shikome, Ikiryo twice and having lost the Nurse, McMourning was on a downward spiral. The Insidious Madness lurking above made sure all his defending WP flips were negative and he still faced 2 (new) Shikome despite the Belles coming to his defence. Eventually he dropped to the Red Joker I had been holding for a couple of turns (as I said the cards were on my side this time). There was not much left to do so we called it at the end of Turn 4. The final score was a misleading 6-0 to Kirai.

A very enjoyable game, which was a lot closer that it seemed. The fact that my models did not drop Corpse Counters made a big difference to proceedings – McMourning would have been summoning monsters as quickly as I was! Lots to think about in the aftermath and Bull eager for a rematch I'm sure.
Posted by The Dark Templar