After a week's break from gaming – I had taken some time off work – it was game time again. Fugs threw a curve ball into the mix by fielding Rasputina instead of his current mistress Lilith.

I had had plenty of thinking time (and time to buy more stuff) and decided to try a mix of new and old.

The game itself was intense and quite a blur to me now. It ebbed and flowed and it was impossible to predict who would win. I started with my usual shenanigans – taking the Merc and Dog down to one wound so Datsu could create Gaki, although I was hoping for Onryo with the trigger. Alas my starting hand was devoid of any crows which would hamper my opening activations.

By the end of turn one I had two Shikome on the board hunting the Gamin. They tried to cast Guaranteed Fate on him with no luck and tucked back into cover to avoid any reprisals. In turn two Datsu managed to create a Gaki and an Onryo and Kirai summoned a second Onryo. By the end of the turn I had 12 models on the board to Fugs' 6. It was still very cagey though – I was nervous about Taelor and all the magic spells facing me, Fugs wary of the sheer numbers facing him. 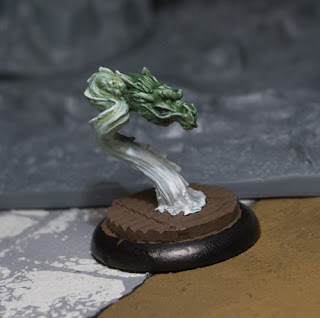 I threw out a couple of bait models and Taelor went for it, killing an Insidious Madness and leaving the Gamin and a Silent One unsupported. I moved The Drowned into a clearing in melee range of Taelor and the other Silent One and cast Drag Under successfully, moving Taelor 3" nearer to my awaiting troops. The Drowned was then killed, dealing 2 Damage to these nearby enemies.

A series of mistakes undermined my strike at this point. I swirled Dasu into melee with Taelor, having already activated her (doh!). There was a tiny slither of a Seishin base visible from behind cover which exposed Kirai, Lost Love, a Gaki and 2 Seishin to a December's Curse blast. Kirai and the Gaki managed to survive but this threw a spanner in the works. On the plus side the Onryo in base with Taelor manage to land 5 wounds in one hit which was something of a silver lining. 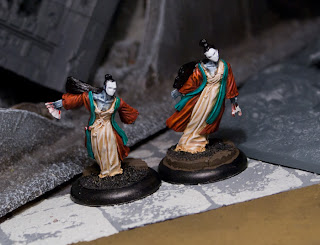 The following turn saw Taelor engage with Datsu, the old dear managing to frustrate her opponent by  taking all three melee hits to die. I summoned Ikiryo who managed to NOT kill Taelor, the heavyweight Onryo finishing off the job he'd started earlier. Alongside all this Rasputina (and the EoP) was having a field day blasting the rest of my crew to pieces – even killing her own Silent One in order to polish off an Insidious Madness and Onryo out of LoS.

The game went to turn 6 and by the end I had wiped Rasputina and her crew off the board, but Fugs had killed over 50ss worth of my models!!… not bad for a 30ss game.

Post game thoughts were positive. I made some shocking mistakes – I blame the week's break – and I was far too cautious for the opening half of the game; when I was bold (especially with the Shikome) things started to die. Considering my Terrifying was negated by the opposing crew and I was facing all Magic attacks I was pleased with how things went overall. It was a good alternative to facing the Lilith melee crew, and even Fugs saw Raspy in a different light after being Sonnia's punchbag for such a long time.
Posted by The Dark Templar