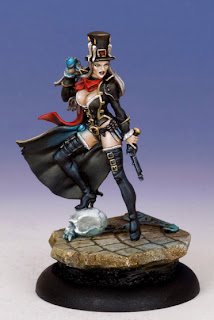 I've been proxying the Desperate Merc for my Sonnia and Kirai lists for a while now. I didn't see the point in buying the model since he was not on the table for more than a turn, unless things were going badly. However, I finally decided to buy the poor fella in (for the stat card if nothing else) and he's been sitting on my paint tray for a couple of weeks.

I'm at a point where he's reaching the front of the painting queue when I spot the above model – entitled Troll Potion – on the Cool Mini Or Not website and I had found his female equivalent. The model arrived from the States earlier this week and the poor desperate merc slid down the paint queue again!

Since holding the model in my hand I have become much more appreciative of the official paint job for this miniature – she is so delicate and the detail so small!

Expect to see her in battle reports very soon!
Posted by The Dark Templar