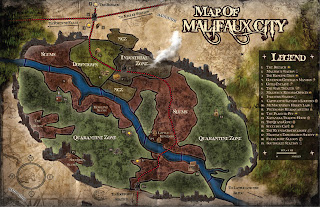 Initial thoughts…
Aside from the models (and the welcome absence of dice), it was the "character-driven" aspect of Malifaux that peaked my interest. I've always enjoyed the longer term investment involved in campaigns and games like Necromunda, and the prospect of doing something like this with Malifaux has been almost too much to bear.

I have been a regular visitor to the Wyrd forums for a year now, looking for help or info relating to Malifaux campaigns but with little return. There are the odd story-driven strategies but nothing to really get your teeth into. But I've been lucky enough to have a game a week so the prospect of a campaign seemed miles away and over time disappeared into the background.

When Wyrd launched their shiny new Malifaux website that included the above interactive map the idea of a map-based campaign reared its head again and I've been getting quietly excited at the prospect again. I do have very limited opponents at present but it could add a little depth to the games we do play.

The main criteria is that it has to be simple. The map adds something visual to study when not playing, which I always liked. There needs to be some kind of advantage to owning territory – a desire to capture more, or specific territory to receive a bonus or two in upcoming games. The idea of weaving a story or vague plot of some kind into proceedings would be good and should hold people's interest – grudges are starting to develop between specific characters already in our games (damn you Taelor…) so this could be developed.

The other big, big thing is there needs to be an end. It needs to have a natural arc and not drag on and on until everyone has lost interest.

We also have a variety of masters, not all the same faction, so this needs to be taken into account also:
I own Lady J, Perdita, Sonnia, Hoffman (still boxed) and Kirai.
Fugs has Rasputina and Lilith
Bull has McMourning and the Viks.

Aside from my Guild collection we have one master from each of the other factions so not really able to go down the faction route.

My question to you viewers is – can you think of anything else that needs to be considered? Any advice of tips for running a small, long-distance campaign?