Blood Bowl is back!

An impromptu visit to Awdry Towers yesterday (after being in hospital this last week) saw Mr Awdry's South Coast Saurus flex their muscles against my Darkblades. This was great preparation for their upcoming game against Bull's Celestial Unicorns. Poor Bull hasn't had a game of Blood Bowl for months now, but the Saurus coach wanted to see how Elves played, having only faced Nurgle so far.

The Darkblades team did have a higher Team Value than the Saurus, so Michael took a Wizard and a Bloodweiser babe to compensate. He decided not to spend any of his cash prior to the game, so still only had two re-rolls and no Apothecary. Of course he was also missing the Kroxigor and a Saurus from the previous game, so was definitely underpowered. He did have six Skinks though, which gave him options.

The game didn't start too well for the Dark Elves. Despite having +1 FAME, I managed to lose the roll for Throw A Rock on the Kick-Off Table. Consequently one of my Linemen ended up KO'd. It could have been much worse, but I was down a man before we'd even kicked off! 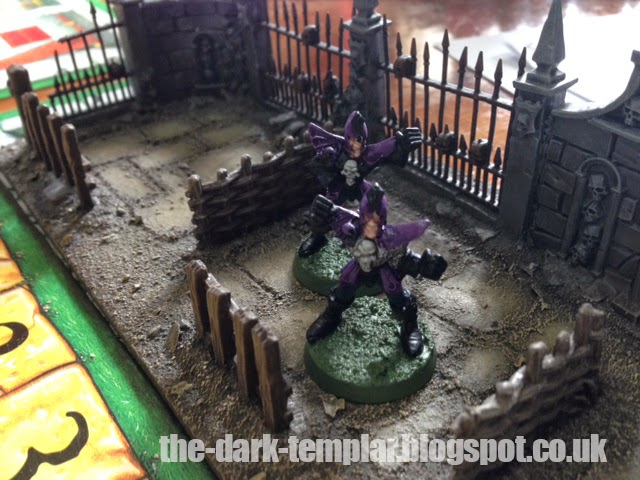 The first half was definitely something reminiscent of It's A Knockout, from back in the day. I was Kicking to the dinos, by turn two a second Lineman was KO and the Saurus had the ball well within my half. Alas the Skinks were relatively unprotected and were being Blitzed. Similarly as soon as I picked up the ball a Saurus would Blitz my ball carrier, and so the half continued. Nobody could keep hold of the ball longer than a turn! 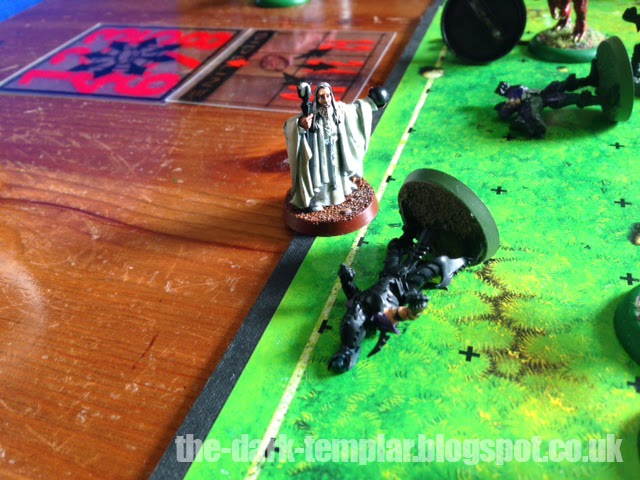 At one point I managed to scoop the ball up – within a few squares of my own endzone and tried to make my escape. Alas Michael decided to use his Wizard (in the hope of having the ball land in an advantageous position so he could score). Instead the ball bounced out of play and was thrown clear across the field. 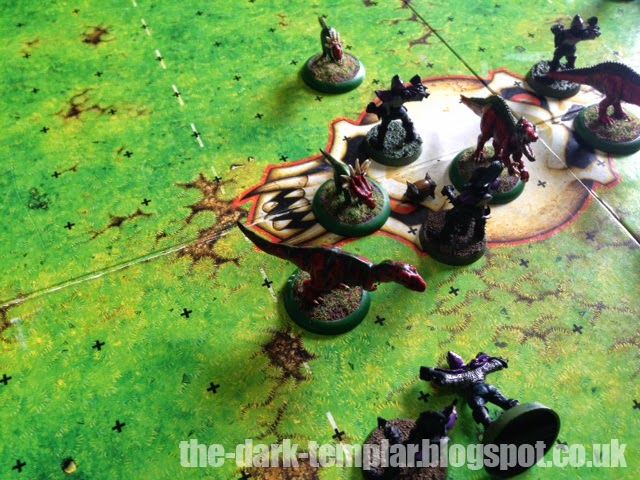 I'd managed to get the ball back towards the halfway line with my Runner before she tripped over her own feet and ended up KO as well. Another hit or two later and the loose ball bounced onto the head of a nearby Blitzer before landing in the middle of a group of players from both sides. I managed to push a skink out of the way, grab the ball and skip a few squares into the Saurus half of the pitch. The bigger dinos were spread all around the pitch and the skinks didn't have the strength to seriously challenge the ball carrier. Michael tried his best to bog down the Lineman in tackle zones, but with a few models to support and some lucky rolls I just did enough to skip away into the end zone. 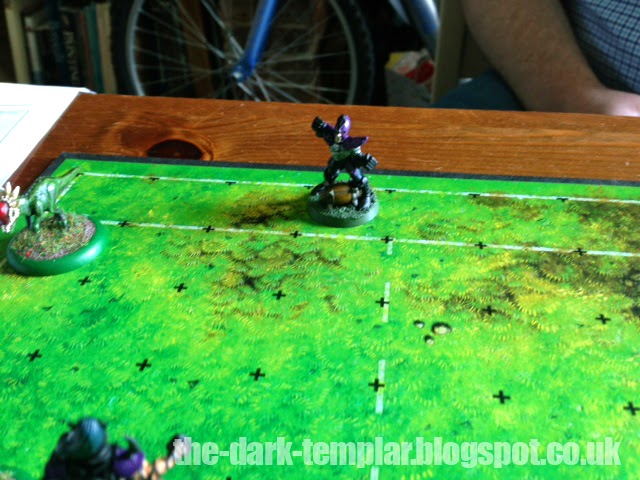 With only one turn left in the half there was little Michael could do but try and inflict more damage. 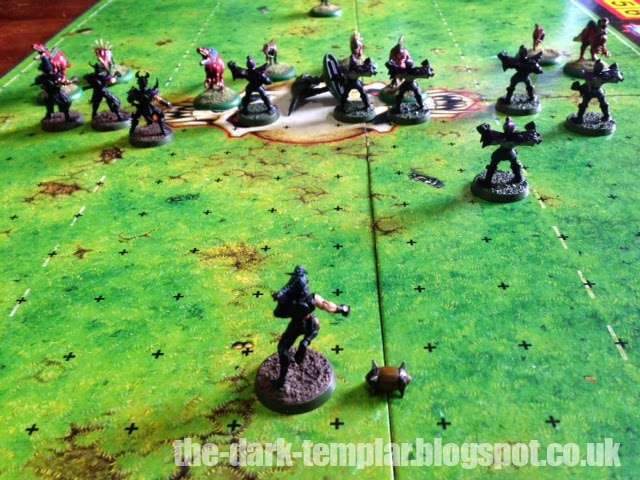 The second half started badly for Michael. Again, Throw A Rock came up on the Kick-Off Table and a dice roll later his Saurus in the middle of the line was on his back. 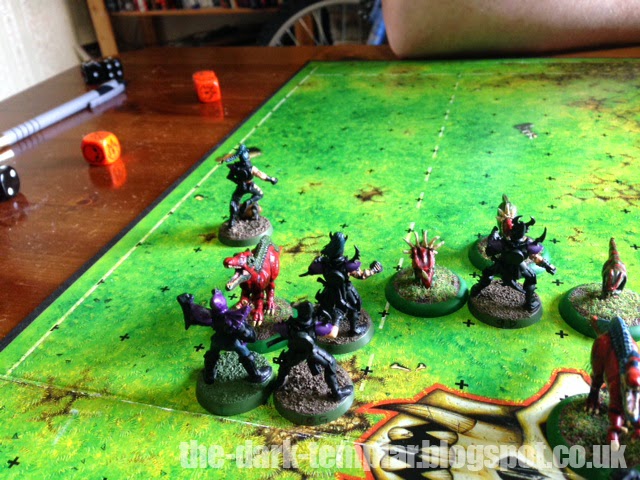 I had positioned all my Blitzers on the weaker side of the Saurus line and took the ball in that direction. The rest of my team risked life and limb, throwing themselves towards the other big dinos to tie them up. Before long I had broken through the line and my Runner was heading towards the endzone. Again the skinks did what they could to slow her down, but my Blitzers were in support and the second Darkblade touchdown came quickly. 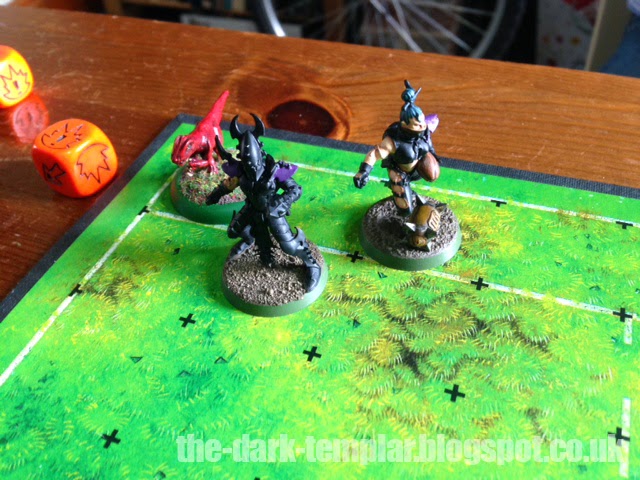 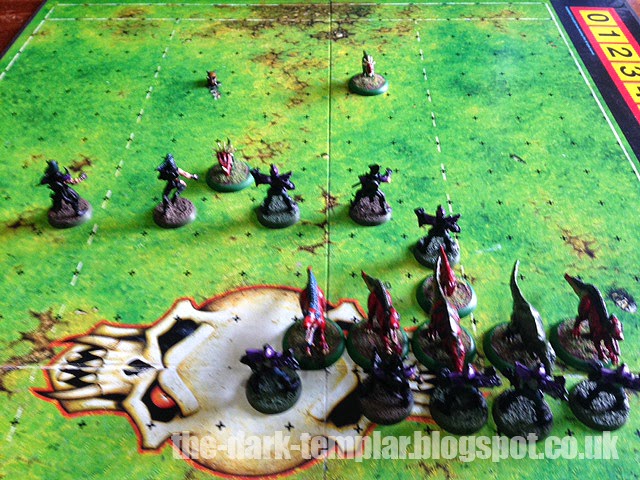 Michael decided to try his refused flank tactic from the first game. Alas this time he was facing the much faster Elves, plus the Kick-Off Table thwarted his efforts before he had the chance to try. A Blitz event game my team a free turn and I charged my team through, behind all the big Saurus. The two lonely Skinks at the back of the field had FIVE Darkblades bearing down on them, with no support in sight. 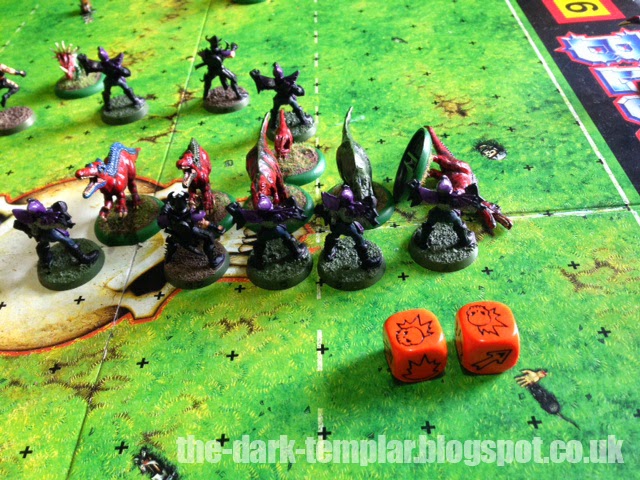 The wheels well and truly fell off the Saurus game as the first hit he attempted came up double Both Down. No re-rolls left. Turnover. A blitz and a cheeky pass later and the Dark Elves were in again. 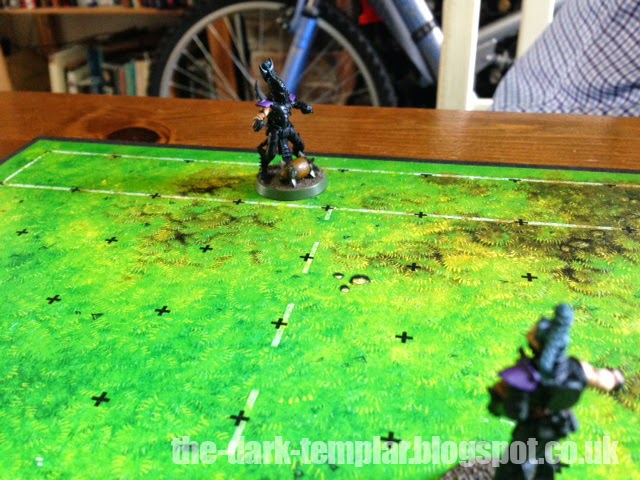 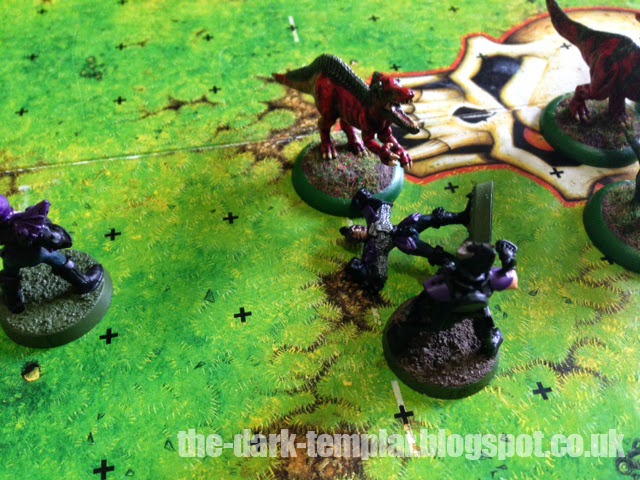 I knew that I had been riding my luck, putting Strength 3 Elves up against Strength 4 Saurus all afternoon. I had got away with murder up to this point, but in the closing moments of the game, Michael's only option was to try and get some Casualty points. The dice finally came good for him – bit late though. A hit on a Lineman saw his armour finally crack and he was KILLED. Luckily for me I still had use of my Apothecary and the re-roll gave him a Miss Next Game result instead. Still, Michael got the points he was looking for and the game ended.

Great game and Mr Awdry is a superb host as always. I think he was unlucky with his dice on the day – they would just not go his way, even when he tried a foul with a -3 armour bonus he didn't roll enough. He will freely admit that he spread his big guys too much in the first half and, despite coming within a few squares of scoring on a couple of occasions, his skinks didn't have the support they needed to get the ball over the line. He was of course down a couple of big guys but he does have a couple of skills now and has time to mull over his spending options before facing Bull's Pro Elves.