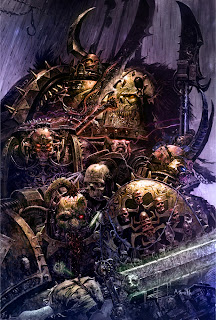 There hasn't been much progress on the modelling side of things as real life gets in the way.

I've been mulling over the new Chaos Codex and at the point where I started putting pen to paper and get some list building done. The trick would be can I make a Chaos list (for my new Nurgle army) that doesn't involve buying any new models. I do have a lot of bits after years on the wrong side of the warp so if I could utilise what I have without spending that would be superb.

I decided to stick with the 1500 points limit of old. This would give me a better chance of avoiding new purchases whilst having an army of sufficient size for a decent game.

Either Heldrake or Forgefiend (new purchase)


Now, having not played Chaos in 5th or 6th Edition I'm sure you folks can pick holes in this list. I understand things are more objectives based and having limited Troop choices could be an issue. However, I like the flavour of it and it will probably form the basis of my list and I will tweak accordingly as my mood changes.

You will also notice the possibility of a Heldrake in the list… after my scathing rant about the model! I am still not a big fan now that I have seen more of it, however, it is good on paper and I have seen some great illustrations of it in the codex and like the concept of it. I decided that the only way I can get around my dislike of it is to get the model and turn it into something I think is cool. We will see how this goes. I'm also hoping that Nurgling it up will make it better (imo). 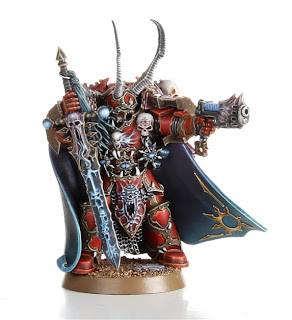 It was a few hours later that I realised I still had the Chaos Lord from the Dark Vengeance box set so, rather than buy a Terminator Lord, I could Nurgle this guy up and use him something like this…

…or do I use him as a Sorceror? So many choices!!