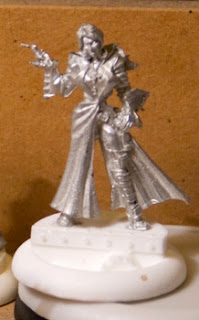 As anyone who knows me will understand, I hate playing with unpainted models. I don't like playing with undercoated models much more, but some paint is better than none. I just don't understand why you would own these beautiful models and not want to put some colour on them.

So, when I decided to use (unpainted) Sonnia Criid in this week's game versus Fug's Cult of December crew you will appreciate how excited I was to get the third of my Guild masters onto the gaming table. Not only did she have no paint, her huge Runed Blade was sitting on the painting tray (to be added post-colour). I was really looking forward to the battle of the elements – Fire vs Ice.

No in-game photos this week – I would not do Sonnia the indignity of photographing her running around Malifaux streets effectively in the buff.

30 soulstones (definitely this time), the crews were as follows:

*My Sonnia box set contained two of the same Witchling and when pinning them to their bases the leg of one of the duplicates broke off, so he is currently in surgery. I have also ordered backups!

I flipped Plant Evidence and took Hold Out and Bodyguard (nice and easy!), Fug flipped Reconnoiter, re-flipped Contain Power and took only one Scheme (Bodyguard) for the extra stones. Diagonal Deployment.

I split my crew into two – Sonnia, totem and Sam to the right, Witchlings and Death Marshals to the left. Raspy and her crew shuffled around on the edge of her deployment whilst the Cerberus moved down the flank to my far left.

The game played out with Fug being quite cautious in the early turns and me making a few little mistakes throughout (the perils of a brand new master). As things progressed and my teams moved forward, Fug sent a Silent One to confront each team with Raspy, the totem and Gamin sitting centrally without committing to either side.

The Death Marshals got into some bother taking a lot of damage, Fug was trying out some Silent One spell combos – even giving one Marshal Frozen Heart and turning him to a statue – opening up lots of possibilities, even if for little gain. Spotting the danger from the encroaching Cerberus (who seemed consistently unable to cast his Leap) a Witchling charged him, inflicting 4 wounds and depriving him of his extra heads attacks. He then died in the return attack, exploding in the monster's face inflicting a further 2 wounds. The big cat was finally taken down by a Death Marshal who had staggered across the street on his final wound. Meanwhile, the frozen Death Marshal killed the Silent One, then the totem, before Raspy finished him off.

On the right flank, Sonnia's team got tied down by the other Silent One. Instead of taking decisive action to take her down quickly I only half committed and she came back from near death to kill the totem and Samael. Sonnia finished her off then took cover behind a wall and healed herself, with still less than half wounds remaining. She retained full line of sight to Rasputina (who had committed to this flank now) thanks to her Magic Seeker ability. Raspy sent the Gamin around the wall to face Sonnia in combat. He did no damage and was hit twice in return by her Runed Blade (forgetting to end her activation with his trigger Sub Zero after she hit him the first time!). Instead of doing damage I managed to trigger Deconstruct on both occasions and Fug decided to discard cards rather than let him die. Sonnia blasted the Gamin with her last AP, the Gamin was left with only 1 wound and Fug with no cards in his hand. Raspy chose to shoot the Gamin with a blast of December's Curse, which caught Sonnia and killed the Gamin. The exploding corpse inflicted additional wounds which were mostly avoided with a prevention flip.

With no cards of consequence in my Turn 6 hand and no soulstones left I was struggling to get my offensive magic off, despite being in a fantastic position. Instead Sonnia shuffled position slightly and cast the firewall to restrict Rasputina's movement. Miscalculation on my part left a marginal line of sight position open to Raspy and she took it. In desperation I discarded almost my entire hand to Counterspell her blasts.

End of Turn 6 my remaining Witchling and Marshal had tagged 3 pieces of terrain between them on the left flank (staggering around with only a wound left each), on the right Raspy was stood on one side of a wall with 7 wounds left, Sonnia on the other with 2. If the game went to Turn 7 activating first would make or break the result. It didn't – Fug flipping a 9 for the third game in a row – and Sonnia came away 6-2 winner.

Thoughts?
Fug has got quite a handle on his crew, especially the Silent Ones. Now he has two they are becoming an issue rather than an annoyance. The Cerberus had a rather anonymous start to his career, but this was largely due to the fact I knew his strengths and had contingencies to deal with him. His cautious start and positioning throughout meant he neither disrupted my plan nor stole in to prevent Hold Out late on. New-model syndrome for sure.

Talking of which, Sonnia missed out on lots of spell prevention tricks. I forgot that Advanced Counterspell includes friendly models within 3", so she could have prevented a lot of damage from the Silent One and stopped Sam from dying. She also needs a lot of soulstones, or hold on to ANY tome cards as she is very dependent on these. We also missed ending Sonnia's activation after hitting the Gamin late on – this too could've had quite a significant impact on the game.

The game certainly boiled down to a close final turn. Fug is really starting to enjoy the game now he's seeing some success with his crew. I now need to consider him a genuine opponent – no longer a padawan learner!
Posted by The Dark Templar