After our intro games just before New Year, it was time to step onto the big stage with full 6-man teams (or rather 5 men and a small animal).

In fairness I had not given the game much thought prior to the day before. As you may have gathered, life is crazy here at the minute and my plans of getting my new players painted up prior to the game were shot down early in the preceding week. Only a heroic painting session the night before the game could ensure that my team at least had colour on them, even if they weren't looking as shiny as my captain, Ox. 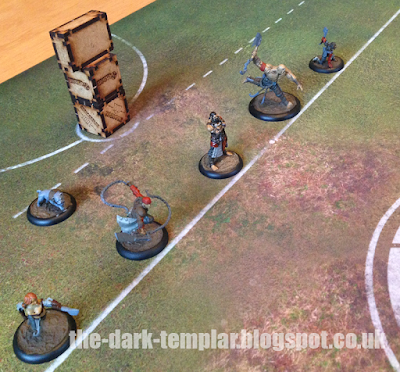 On the morning of game day it was a different story, anticipation had reached fever pitch (I'd been up since 5am – seems our son was too excited about the game to sleep as well). Luckily I had packed everything and left it by the front door the night before, thus ensuring I didn't forget anything – Bull may live a lot closer now but it would still be a trek to come home to retrieve missing stuff. 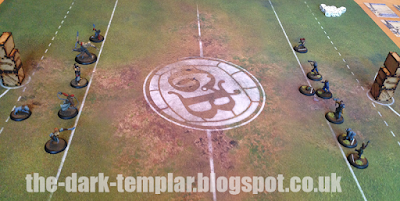 I would finally get to see what the full Mason team was about and Bull would have to survive the carnage that is a rampaging Butcher's team. We set up, sat down to play and realised we'd forgotten the rules almost completely since our last game!

Didn't take long to get into our stride though… 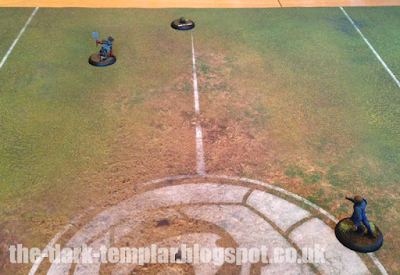 Bull had Flint Kick-off and it skewed wildly to the far side of the pitch. I sent Boiler chasing after it whilst the rest of the team geared up in the middle of the park for the inevitable brawling. Flint managed to grab the ball but skewed his back pass to Harmony, the ball pinging towards the Mason's goal line – this was not happening for Bull at all. Rather than chase the ball I sent Boiler in on the stranded sister and he started to hack and slash. 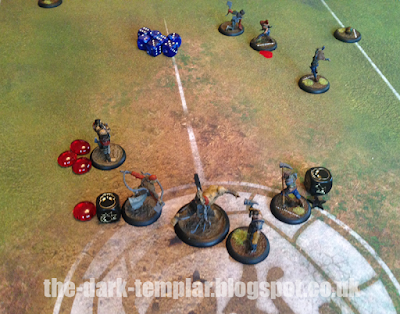 Ox went steaming across the field to grab the ball, closely pursued by the Mason's captain Honour. Meanwhile, elsewhere on the pitch, Boar and Shank got bogged down fighting Mallet and Tower, and Brisket was goaded by the Mason's monkey and couldn't move until he was dead – no problem!

I had started to rack up the points as Harmony was taken out (twice!) then Tower finally dropped. Honour managed to strip the ball from Ox and successfully kicked the ball to Flint who was still stuck out on the wing. He charged off towards the Butcher goal, being tracked by the rather nifty Shank. 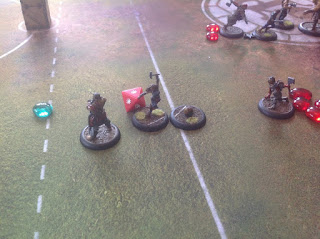 For once my superb dice rolling deserted me – despite getting three rounds of attacks against Flint (in the region of 22 dice!), Shank was unable to make any serious impact and stop him getting a shot away. Bull finally saw the bit of luck he needed (though in fairness he had stacked the dice roll as much as he could) and the ball soared to the Butcher goal – SCORE!… and the first Mason points on the board. 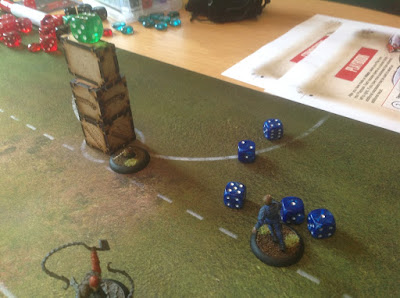 The ball bounced away across the other side of the pitch where Brisket and the Butcher's dog, Princess, were still brawling with the monkey. If I could kill the damn thing and get away, this whole side of the pitch was clear to the Mason's goal. Bull saw the danger and had Flint race over and strip the ball off Brisket. 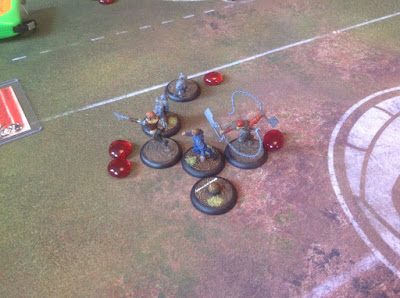 Not to be outdone, Shank followed suit and inched the ball from Flint, racing away towards the goal. Ox finally downed Honour and Brisket killed the monkey – I was only two points away from a win. I was pretty confident Shank could skip through the middle of the field and grab a goal, supported by Ox next turn.

However, we never got that far. Brisket reaped revenge on Flint and he died in the Maintenance phase due to poison. I got the points I needed to secure a win.


Go over to Bull's blog to read his version of events – they may differ somewhat in the details and perspective ;)

…and thanks to Bull for a superb game, and providing additional photos as my phone decided it had no more space for images part way through the game!

Lots to mull over – there will be analysis and team interviews soon. Stay tuned!