Clash of the Big Hitters

When I arrived at Awdry Towers, Michael and Bull were already in the middle of a last minute training session. I have to admit that I was cautious yet confident going into this game. Last time we played Blood Bowl I had found my zone and things were really starting to click with all my teams, however, that was over a month ago and I was struggling to remember the basics as I unboxed my models. 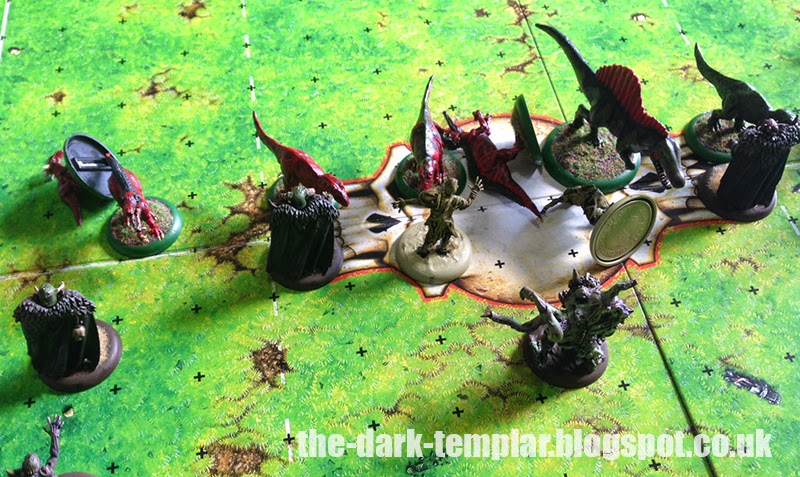 The game started with an ominous Kick Off Table roll – Pitch Invasion. Luckily I only had one player stunned, whilst the Saurus were down two!

I kicked to the Lizardmen and the game got underway. The halfway line soon became an impenetrable wall as the two teams literally went head to head. All my months of learning had gone out of the window and I was resorting to newbie tactics, desperate to down some of the Saurus big hitters. 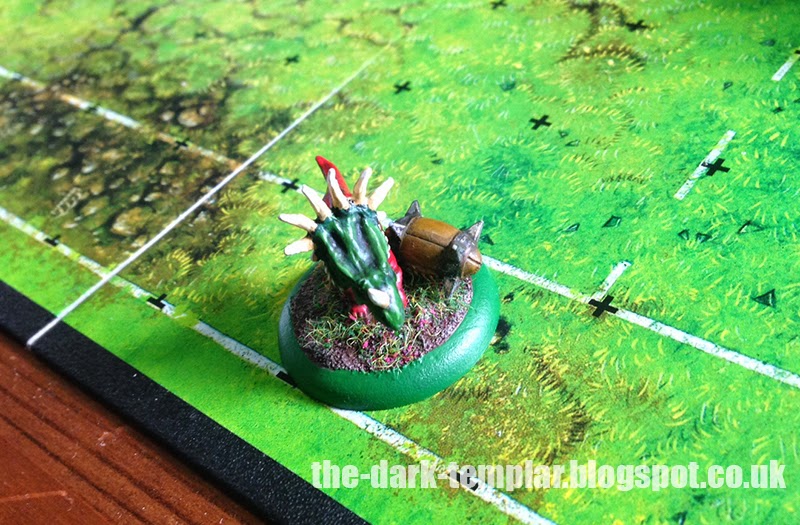 It didn't help that the dice were definitely not on my side and I quickly used up my two re-rolls. With Bull coaching him from the sidelines, suggesting various moves and combinations, it wasn't long before a Skink broke through the line with the ball and raced into the endzone.

The Lizardmen kicked to me and I was feeling quite confident that I could score before half time. The Kick Off Table roll went against me again, as Michael got a free re-roll. Not to worry, I set my plan in motion but my Beast of Nurgle continued his non-participation stance and my plan started to unravel.

My Pestigor went for the ball, to move it out of danger, but was unable to pick it up. A skink broke through the lines, followed by a Saurus and before I knew it he had grabbed the ball and was in the endzone. Much laughter and cheering followed from the coaches on the other side of the table and I could see my chance of an opening win slipping away.

Half time brought some respite – and a bacon sarnie or two – and a chance to gather my thoughts. I would be receiving next half and could grab a couple of scores if I was cunning and ruthless enough. 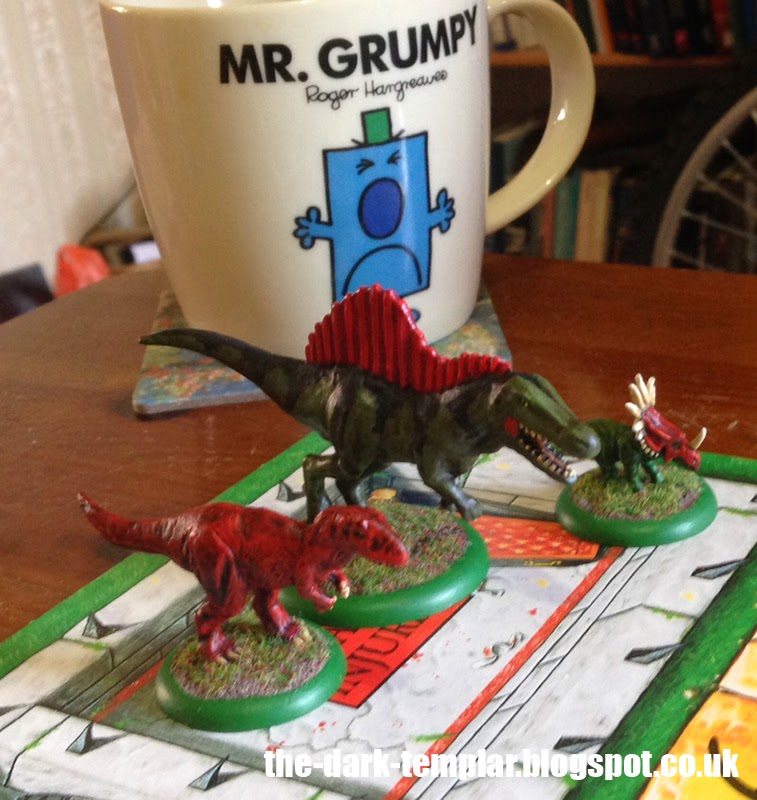 By the end of the first half I had managed to injure not only the enormous Kroxigor, but also a Saurus, drastically reducing the oppositions hitting power. This would be the key to my comeback.

The Kick Off table gave Michael a free Blitz turn, but the Pestigor grabbed the ball with intent and ran straight up the middle to a gap that was being created. I ensured all the Saurus were tied up before he burst through (somewhat alone) with only a skink or two to stop him. 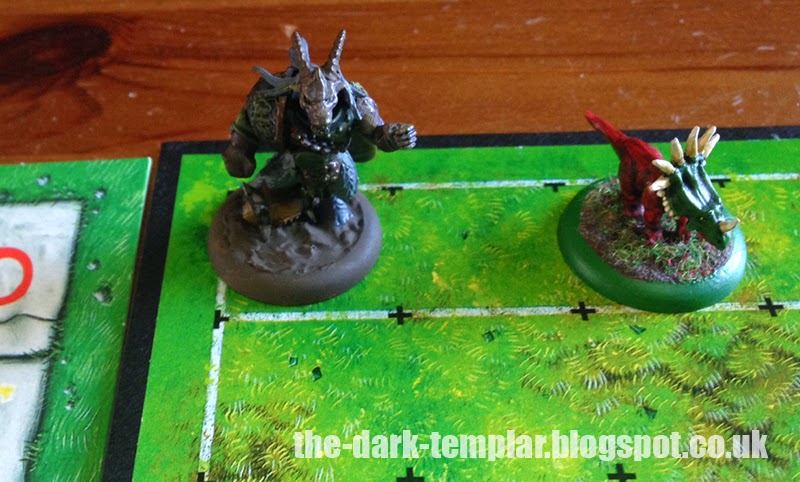 I was desperate to score as quickly as I could but the dice were against me and it took until the fifth turn for me to stroll into the endzone. Not a lot of time left to grab an equaliser, but do-able.

By this point Bull has left the match for a prior engagement so Michael was left to his own devices. I was hoping to seize an opportunity from his lack of experience and the inevitable mistakes that follow.

I set up my team in a blitz formation, hoping to charge down the ball and force a turnover. Michael decided on a refused flank tactic so I decided to take a chance and kick short to the opposite side. The dice were kind and the ball stopped 5 squares from the half way line, with no models between it and my Pestigor. The Kick Off table granted Michael another free move but I was confident that there was nothing to stop me grabbing the ball and getting an equaliser.

I have to say, risky as it was, the dice were kind and Michael's play worked a charm. His skink grabbed the ball and ran over to another skink handing the ball to him. This second skink then ran down the line behind the Saurus refused flank and squeezed through a gap.

Despite my best efforts I had nobody back with enough speed to get to the ball carrier before he scored. 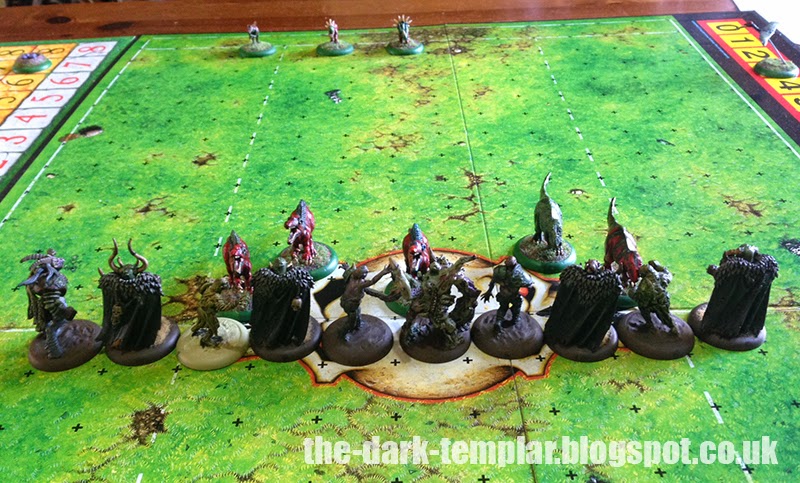 My final turn saw me try and inflict as much damage as possible but my dice were done for the day.

End of the Game.

Great game after months of build up. A crushing defeat for my Nurgle in the end but we walked away untouched and with a new skill for my Pestigor (Sure Hands perhaps?!). My Beast of Nurgle also managed to get two casualties so he is sitting nicely on 4 points.

Thanks to Michael for being an awesome host as always, and a gentleman in victory. His next game will be more trying as he will be missing his Krox and a Saurus, but he too came away with a new skill for one of the skinks.