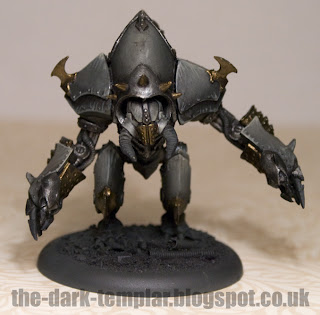 I mentioned the other day that I had finally reclaimed my airbrush and compressor, dusted it all down and given it its first run out in over 20 years. Thought I should post a couple of pics.

As you can see I kept things simple, using it only to lay down some initial colour on the armour plates and get some highlights done. What it has allowed me to do is get some very smooth grads painted that would be near impossible with a brush (and my skill level). In addition it took less than an hour which meant I got a lot more done in the time available to me. I'm at least 60% done with this guy in an evening, which under normal conditions would have taken 2 or 3 evenings. 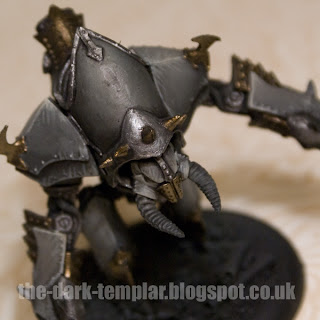 As I mentioned in my last post, I do need to refine my close control. Overspray became a problem when I went in to do the leg plates on this model, and highlights ended up being bigger than I intended.

I've got six small Cryx 'jacks, which would normally fill me with dread and sit on my tray for months. I'm quite confident that I can get them almost complete in a couple of evenings, which I could never contemplate previously.

The next test though will be on some terrain. I have the Chaos plastic temple which I am in the process of building. The airbrush will allow me to paint it very quickly and get highlights and details done in virtually one sitting.