The (not) Salute Spoils… 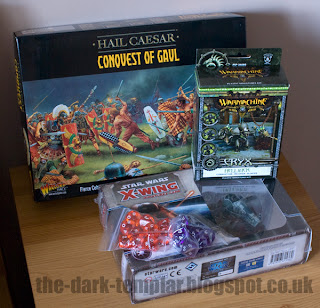 You may remember that I came away from last weekend's Salute 2013 show with no purchases at all. This was mostly due to the fact that when I went to pick up the stuff I wanted, I noticed I could get it cheaper elsewhere (I thought Salute was all about deals?!).

Anyway, my non-Salute purchases arrived this week and here they are…

First of all we have the Conquest of Gaul box set from Warlord Games: this includes the Hail Caesar rulebook and almost 100 plastic minis!

There is a second Cryx Helljack for my fledgling Warmachine army. I already have a Slayer from the starter set but this kit will build one of three types.

Then I have the gorgeous Slave I expansion for X-Wing. I've held off buying this for a while, after picking up the Millennium Falcon, but couldn't resist any longer.

To round things off I've got some Orange and Purple gem D10 dice for my secret project. Progress is being made and there may be an announcement on the blog soon.