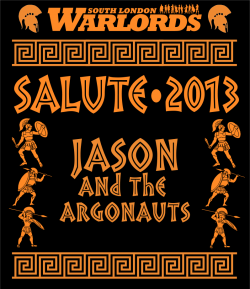 As in previous years I was rather excitable in the days before Salute this year. I often have a particular game that's obsessing me going into the show, but this year I was more concerned with meeting people and having a chat about the wheels that drive the industry.

We arrived at 10.30am, pretty much at the same time as everyone else then. A huge queue greeted us when we entered EXCEL, however, it kept moving and we were inside the show in no time. Immediately upon walking in it became apparent that the show was definitely busier than previous years – uncomfortably so at first. There were more stands than last year and more smaller companies seemed to 'club together' to have a presence – great to see and very encouraging. In contrast I noticed that Privateer Press seemed to have merged with the ever-dominating Wayland Games stand, which was a disappointed – I do understand the logic though: why have a stand selling gear at 20% more than the discount retailer across the room?!

There were lots of demo games going on, new and very creative gaming boards. I particularly like the Victorian London board – a skirmish game being played across rooftops whilst below, the rest of the table was covered in cotton wool smog.

This year I decided to leave the camera at home so no photos (sorry). The funny thing is that, judging from the photos I've seen elsewhere on the net today, everyone else seemed to be at a different show to me. It appears that I missed so much despite being in there for 4 hours. I went in full of gusto but after a lap of the room was quite worn out with information overload and my brain began to slowly turn to sludge

The highlight of the day was undoubtedly meeting people. I didn't get to speak to many industry insiders as intended but I met up with several individuals from the blogging community and finally got to put some names to faces. Great to meet folks, didn't get to chat to as many as I would have liked but time flies when you're gas-bagging and the group gradually dispersed. Just prior to that I 'bumped' into my former housemate who I haven't seen properly since my wedding – quite an emotional reunion and a definite highlight of the day.

As the afternoon rapidly passed 2, I was all talked-out and all walked-out – it was time to spend some money and make our way home. I had the shopping list in mind before leaving, but even I outdid myself this time. My haul for 2013 consisted of…nothing!

That's right. I walked away with nothing more than the freebie plastic model and solitary dice in my Salute bag.

But why I hear you ask?!

I had noted the week before the show that most of the things on my list were available online for less, so had already ordered some bits. The things I did go to pick up (literally) were put back down when I discovered I could get those cheaper elsewhere too!!

I'm not normally so frugal – I can convince myself to buy pretty much anything if I want to – but buying the things on my list at the show made no financial sense. I placed another online order when I got in so there should be parcels galore arriving next week.

In the meantime I've been practicing my airbrushing and getting a little more painting done, so will have some photos for you in a day or two.

As for Salute, another great year – possibly the best I've been to so far – and already I'm looking forward to next year. However, there's a lot going to change on my hobby table between now and then so who knows what next year's show will bring…