It's been an interesting weekend but not a lot to show you lovely folks. So in lieu of any solid hobby developments (that I can talk about) and piccies, I thought I'd do a quick update. 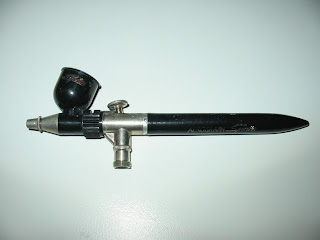 First on the news front is that I FINALLY got my airbrush up and running. I've had my Devilbiss Aerograph Sprite since I was in college back in 1992, it was an upgrade to the cheap Humbrol one I'd used to learn airbrush illustrating with. Alas it was never used – I was introduced to Macs and Photoshop soon after and never looked back. I realised some time ago that it had a potential new lease of life in the hobby environment pending, I just had to retrieve it from the attic at my mum's house in Wigan. It took me two years to get around to it but my airbrush and compressor made it Kent last week and over the weekend I got to have a go!

No photos of my test piece yet, which was a Cryx Slayer for Warmachine that I bought this time last year but has been sadly neglected for the last 12 months. Despite some initial hiccups I have to say that I am very pleased with the results – large areas of armour plating with super-smooth grads. What would have taken hours to do with a brush and watered down paint took about 30 minutes and looks far superior. It allowed me to then go in with a brush and add detail.

I still need to get my close control back – I'm fine with the large areas but smaller, more detailed areas resulted in a lot of overspray, which was a shame. 20 years since I last used an airbrush and I've never used a gravity-feed airbrush before, so mixing colour in the paint well was a new experience. Very exciting. 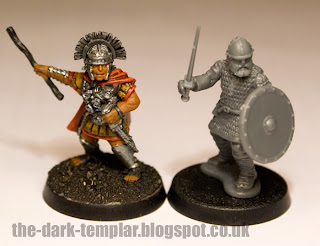 The other very exciting news was a trip to see Bull on Sunday. We did some sterling work on the secret project and made a lot of progress. As a consequence it won't be long until I can start talking about it openly on the blog, something that I am really looking forward to.

I also had a host of stuff go on Ebay last night – the first round of my "Mikie needs Salute spends" event. More on tomorrow night. I'm having to be quite ruthless but at present have over £300 (retail value) worth of stuff going up, most of it brand new. The majority of the stuff is Malifaux with some Hordes and a Forgeworld Dread soon. Let's hope I buy lots more stuff at Salute that can sit in a box for 12 months and be sold on Ebay next year – I love this hobby.