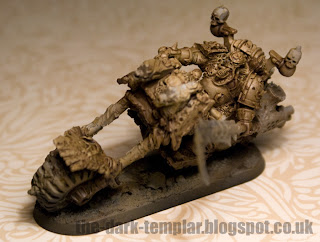 Having sat on the painting desk for the last two months I thought I would use the Nurgle Biker conversion as the next test subject in my airbrush experiments.

I started by giving the whole model a coat of Burnt Umber. I did a couple of passes to make sure the colour was solid but did leave the black undercoat in the deepest of recesses.

This was followed by a pass or two of English Uniform, which you will remember has become my base colour of choice for the Nurgly marines. I sprayed from quite a wide angle so that the hidden areas would remain largely Burnt Umber.

A pass of Bleached Bone across the most exposed areas was followed by some white over just the highest areas. This procedure is rather similar to the zenithal highlight technique I watched on a Miniature Mentor video by Thomas David. 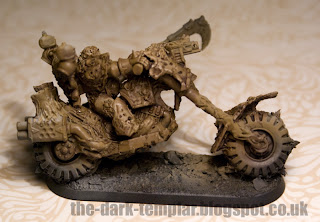 Once I was quite happy with things I moved to the brushes. Just like the Bonejacks from my previous trial, the airbrushing left things very highlight heavy… on purpose. I gave the model a wash of watered down English Uniform to unite the colours in general. Once this was dry I gave the entire model a wash of GW Agrax Earthshade (dark brown).

I had to leave that some time to dry so decided to go back at a later date. Using a similar technique as the Bonejacks, I will go back in with a brush and darken the shadows across the model. Once I'm happy with that I can go to town on highlights and details.