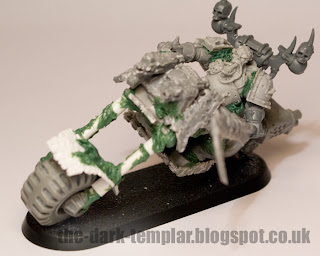 Here's the first pictures of my Nurgle biker champ after the drill has had its wicked way and the first round of greenstuff has gone down. Still more to do, plus maybe some added extras, but you get the idea of where we're going with it. 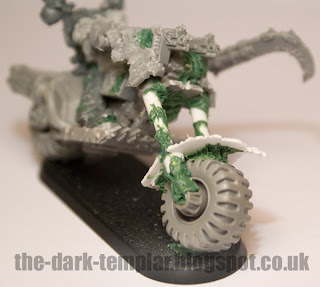 Already things are looking much improved and nurgly. The wheels don't look particularly brutal so I wanted to go to town on them. They will eventually have spikes in them, but I liked the idea of it looking like they shouldn't work properly due to being so overgrown with mutation. Getting there. 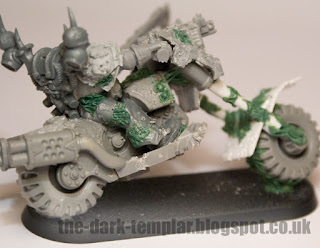 The rider himself is pretty finished with the greenstuff, the focus now being any large areas of the bike, such as the fuel tank. The drill battered it with pock marks and now I'm working back in with growths.

Very happy so far. I don't want to go too overboard with the greenstuff but, as the unit champion, this model needs to stand out a little. The back half of the bike remains relatively untouched at present, but I have plans for that!

So, another post about the greenstuff stage then on to some painting hopefully.