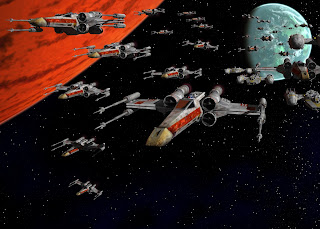 My fling with X-Wing continued this weekend with a visit to see Bull. Again I stuck with the contents of the starter box, given that it was Bull's first outing in the Star Wars universe.

We walked through the basics of the game, Bull flying the X-Wing and I took the TIEs. Bull was eager to get stuck in proper so we reset and got going.

Game 1 was the shortest and most brutal game yet, the two sides charging straight towards each other and opening up with everything. Luke ripped into the TIEs inflicting heavy damage but fell quickly to the combined shots of the Imperials – the dice gods finally on my side.

We played four games in total and came away with a couple of wins each – the latter games much more tactical, lots more cat and mouse. Needless to say, Bull was very impressed with how the game played, how easy yet tactical it turned out to be.

Elsewhere, lots of other hobby goodness happening in the background… to be revealed at a later date.
Posted by The Dark Templar