The story so far… 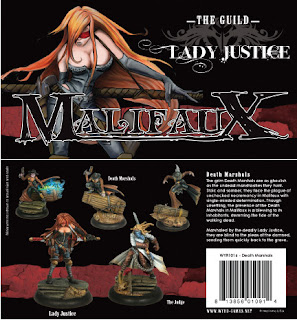 Over the last three or four weeks I've been trying to decide which new games sytem to look at. The main driving force will be the miniatures – you have to enjoy what you're painting or else you will run out of enthusiasm very quickly… one thing I have learned and continue to be reminded of – I won't get much playing time so the minis have to be the main focus.

As I mentioned before I am currently designing the rulebook for Critical Mass so used that as an excuse to order several different books from various sources, all in the name of research. Then I sat back to await the influx of parcels. The order list included Infinity v2, MERCs, Warmachine v2 and Malifaux. MERCs was coming direct from the States so wasn't expecting that for a good week or so; Warmachine arrived the next day from Firestorm Games in Cardiff; Infinity and Malifaux rulebooks were coming from Wayland Games and after a fortnight still hadn't arrived. Frustrated, I ordered the Malifaux A5 rules manual from Firestorm (having been so impressed by their speed of service so far) – it arrived the next day!

After lots of reading and net research I was ready to start building and painting – just about the time my Malifaux starter crew arrived from Maelstrom Games (took about a week). Lady Justice is an awesome model, as are the rest of her crew. I found the models quite delicate kinda like Rackham's so some of the pieces took a lot of effort to stick securely. I had also ordered some resin bases especially for these guys, from Fenris Games, and after a couple of evenings had the models ready.

A spray of black primer yesterday morning before work and we're pretty much ready to go. I have to say I'm really looking forward to painting these models.

As for the other rulebooks, they have all arrived now and I've had a good look through. Warmachine was good, but I've played that in the past so there were few surprises there. The MERCs rulebook is beautiful and although expensive to have sent over I went through it cover to cover. Their miniatures are equally as stunning but I just wasn't taken by the rules. Similarly with Infinity, fantastic models but the rules were confusing and the rulebook (as nice as it was) was all over the place and very difficult to follow. Shame really, but I think I have found my next project.
Posted by The Dark Templar