Been a long time coming… 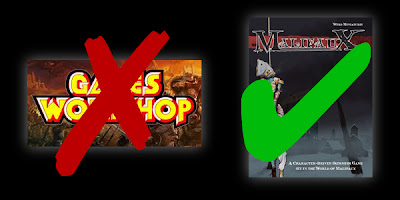 It's been quite a while since I last posted – about the same amount of time since I last picked up a paint brush. Anyone who knows me a little will know that I've been playing WoW since the cataclysm expansion was released (mainly due to being easy to pick up and put down as I don't have a dedicated modelling area). Maintaining my enthusiasm for 40k – indeed anything GW related – has been quite a battle over the last 6-9 months as I'm just not that excited by it anymore, to be blunt. I'm just not liking where it's all going – the models, the rules, the cost.

After a lot of soulsearching I have decided to sell everything – almost. My ongoing Dark Templar figures will stay along with a few OOP models I've always had earmarked for them, but everything else will hit Ebay over the next 6 months – including the Blood Angels many of you saw coming to life, my Nurgle marine project that never really got going, and my long-serving Iron Warriors that will break my heart to see go.

Anyone interested in owning some/any of these models should bookmark my ebay link. This week it is mostly WH Fantasy stuff, but the 40k items will be up in the next few weeks – probably after the Easter break. I will post again nearer the time to give you folks a heads up.

So am I quitting the models completely?  Err…no.

I am currently in the process of designing the Critical Mass Games rulebook (not the actual rules just the layout/graphics/etc.) because, well, I'm a graphic designer. Part of the prelim process was to research other rulebooks, many of which I actually own or have owned a copy of over the years. What I realised was how fantastic some of these games are, and how I'd forgotten that caught up in the GW marketing machine. I like the idea of playing skirmish level games – we don't have the sapce or the time for anything else – and they need very few models that can have care and attention lavished on them. I don't feel the need to convert them because they are beautiful in their own right. In particular my old Rackham collection stood out, as well as the current Malifaux range. I have been putting together a Guild crew on custom bases and look forward to painting them.

With Salute 2011 coming up in less than a fortnight I can safely say there will be more purchases made. Photos will follow for the blog and hopefully the odd game now and again.
Posted by The Dark Templar