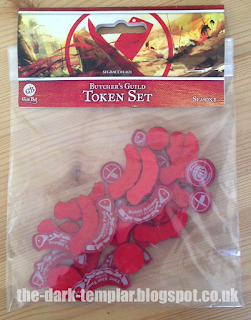 I don't review things very often on the blog. I don't have the time or the inclination usually, but when my Guild Ball Butchers tokens arrived I felt compelled to post some thoughts.

As usual I ordered my tokens from Element Games, and as usual they arrived within 24 hours and came with a discount on the RRP. Those guys are so reliable.

I'll be honest, I didn't intend to buy the tokens at all. We've been using random dice to indicate conditions, etc. during our games and it's worked ok so far. I'd never be so cheap for a tournament – it's unfair on your opponent not being able to identify exactly what's going on, only that something is going on – but for fun games it's fine. Only when I saw that Bull had purchased some Masons tokens I felt obliged to restore balance. 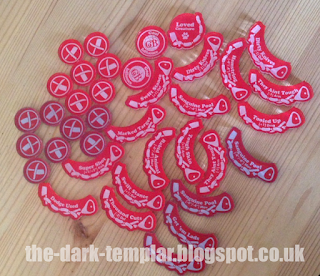 Let's get it out of the way now, my biggest gripe with these tokens is their price. £16 (discounted) for 37 pieces of shaped plastic is excessive to me and would normally have stopped me parting with my money. When you compare it to the Warmachine tokens that cost £7 (discounted) for 44 pieces of shaped plastic, it makes you sit up and think. Now, I have no doubt that the cheaper price that Privateer Press charge is down to cheaper quality plastic and economies of scale. Also, don't forget that the Steamforged guys are still starting out and finding their way – Privateer have been around for decades. Still, £17 for a set of team-specific token is a lot – god help you if you have multiple teams!

There is no doubt that these tokens are a quality product. The printed text/icons are flawless (that I could see), the plastic itself is a good 3mm thick and the bespoke shapes are smooth and well finished. The tokens even come with a blue protective film over the top of each of them – the image further up has a few tokens with a darker hue to them, these still have protective film on them. This film is a double-edged sword, however, as I had to spend 15 minutes with a scalpel trying to get the film off without damaging the token surface… off all 37 tokens. In the end it's only a minor inconvenience that comes with what is definitely a very good product. 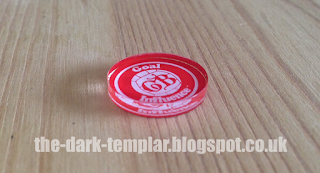 An odd category title, but one that presented itself when comparing the Guild Ball and Warmachine tokens. The Warmachine set is very generic – it has tokens for focus and a few common conditions, the rest are plain for you to write on. They will never have to be updated (in theory), but require some house keeping during the game. In contrast, the Guild Ball tokens are specific to each ability and condition available to the Butchers at present. Yet all the tokens look identical and I found myself having to study the small text to identify a specific ability. Each token does indicate (in a basic way) what each ability does in addition to the title.

Unfortunately, as Guild Ball expands and my team gets new players, Steamforged will no doubt have to expand the range of tokens available for my team, or re-issue this original set with additional tokens – not financially great for me.

I quite begrudged paying £16 for these. I certainly won't be buying them for my Morticians. But despite that, they are nice bits of kit, it cannot be denied. They are better quality than the Warmachine tokens without doubt. However, if they are to be pitched as a premium product, I would be tempted to upgrade the zip lock bag with something a bit more glam and long lasting, then add an extra page in the paper doll document for those who would rather print them out themselves.

Looking forward to putting them to some use.