The (Butchers) Circle Is Now Complete 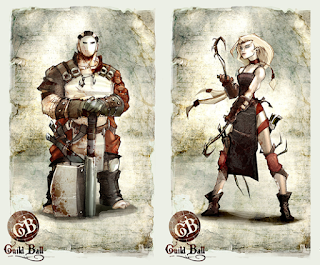 As Guild Ball fever starts to ramp up I decided to push things on and get my Butchers collection complete. When starting out with a new game, a lack of knowledge can hamper your purchasing decisions, especially when not wanting to invest too much too early, and this was the case here. However, with each Guild Ball team having so (relatively) few models it made sense to give myself as many options as possible (even if they average £10 each) now that we're more committed to playing the game.

Meathook arrived from Element Games last week and I had but the briefest of glimpses at the packet before it was whisked away till the weekend. 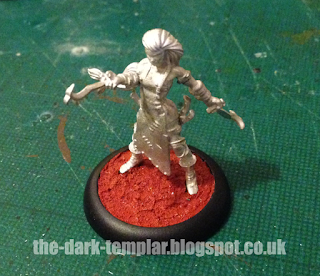 I found myself with a spare* half hour on Saturday morning, with the house empty – rare occurrence indeed – so took the time to pin some rather dainty hands onto some rather scrawny arms. Another triumph for tiny drill bits and tiny pins. There were very few mould lines but she is now ready for an undercoat.

* I found half an hour that I could skive from the jobs list and not be found out by SWMBO. Luckily she doesn't read the blog!

I need to read up on her rules a bit more but she will add a slightly different dimension to the team when included. She's got average speed and a decent kick, albeit it a short distance. In truth Meathook is all about the Bleed condition. She dishes it out and gets bonuses when facing enemies with it. She is very INFluence greedy though, only bringing 1 to the table and looking for 4 in return! 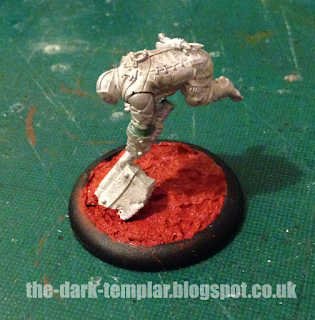 Next we have everyone's favourite goalkeeper, Tenderiser.

You may remember I'd had problems with his arms. Seems it's quite a universal issue, but I took the opportunity this weekend to stick the last bits in place, patch up the gaps and get his base sorted. I do like this model, and the pose is appropriate to his special abilities, but I would love to see him in a traditional ice hockey goal tender's stance, making himself look big.

From a rules perspective he is first and foremost (as you would expect) about goal prevention. He is relatively slow and has typical 'big guy' stats, but his speciality is his character play list. Boom! He will provide another obstacle for opposition strikers to get past if they want to score.

I'm looking forward to getting some paint on him. 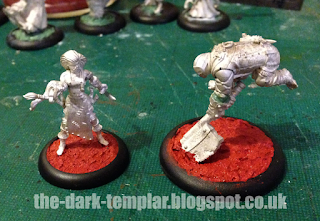 Talking of which, I've made a decision regarding the application of paint going forward. After the mad painting session before the last game I think I will apply a similar 'basics only' paint job on all my new models while I decide how useful or not they are in my team. Once I have a character that has earned a regular spot I can go back in and spend more time giving them a more worthy paint job, like Ox.

This way I get my team painted quickly and don't waste time on characters that won't see much time on the pitch. After last week's game Shank is the early contender for some more paint – although Princess is a must, being the mascot.

With a bit of luck I will be able to squeeze in a bit more time this week and we may just see some painting!


EDIT: No sooner do I post this than I get more projects to do as part of job applications! That's this week's evenings gone then, lol.