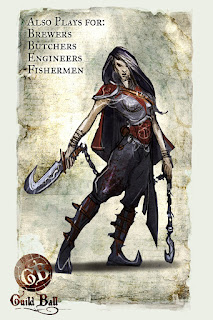 Not content with two new additions to the team, I've acquired the services of the "must include" Union model for the Butchers team… Gutter.

Like most new Guild Ball players, I've trawled the internet for pearls of wisdom regarding my team of choice. To be fair, the Butchers don't require much finesse – it's all about maximising the damage output – unless you decide to go down a more challenging goal-scoring route.

From what I can see, Gutter fits into the Butcher mould perfectly and still manages to bring something new to the party. In addition to being another 2" melee player, she has an ability that will pull an opposition player towards her. This, of course, can totally mess with your opponent's plans – not to mention drag them into a world of Butcher hurtiness. 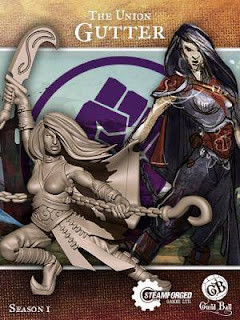 The model itself is possibly the smallest Guild Ball model I've seen (with the exception of the mascots) and I'm not convinced was worth the (discounted) £8 price tag. A very delicate model, I have been handed another pinning challenge – her hand and arm are surely thinner than Meathook's!

Like all the Guild Ball models there is lots of detail to be found on the miniature. She's also my first Union player (the Union players can join other teams as well as play on their own team) so won't be painted up in the Butcher's colours – I may need her to join another side later down the line and have no intention of buying or painting a second model!

No doubt we will be seeing more of this one soon!