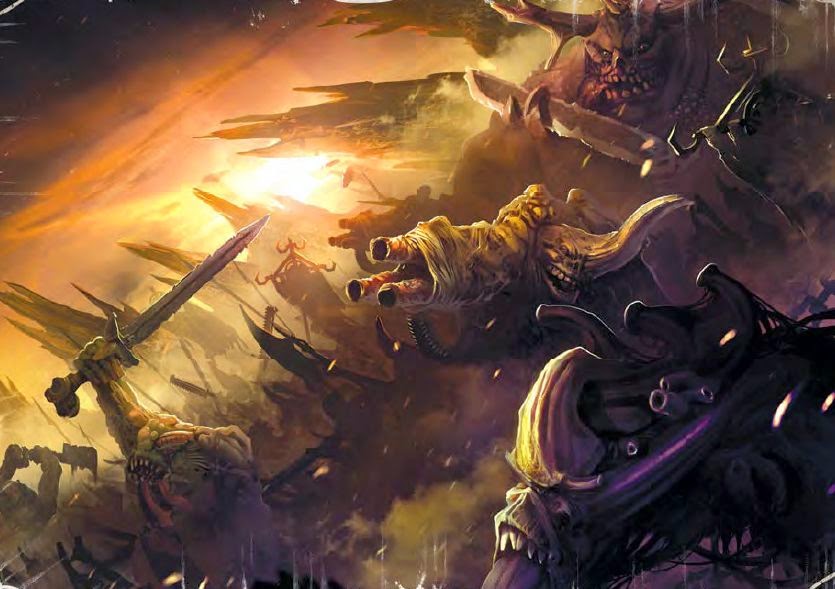 I've always found you tend to learn more from your losses in 40k but let's see what was gleaned this time round and which units excelled.

The Battle of the Forge on Sunday was a great game. Chaos triumphed in the face of some serious Ork mech and held on to the Forge which will be great going into our final epic fight.

Bull did spring a couple of surprises that I hadn't really banked on. First of all his Ork army was all mech, which given that I had decked out my marines with mostly flamers again should have been a problem. However, I had included a melta gun in my Plague Marine units which worked out a treat in the end. These melta guns managed to take out the Gorkanaut in a single shot, and get three hull points off the Stompa (the last one killing it).

Given the firepower hanging off all the Ork machines, I was expecting a round or two of massed shooting as he crept forward. What actually happened was only the Stompa did any real shooting while the other elements shot forward. Alas, hesitation seemed to creep in, compounded by some heavy terrain. 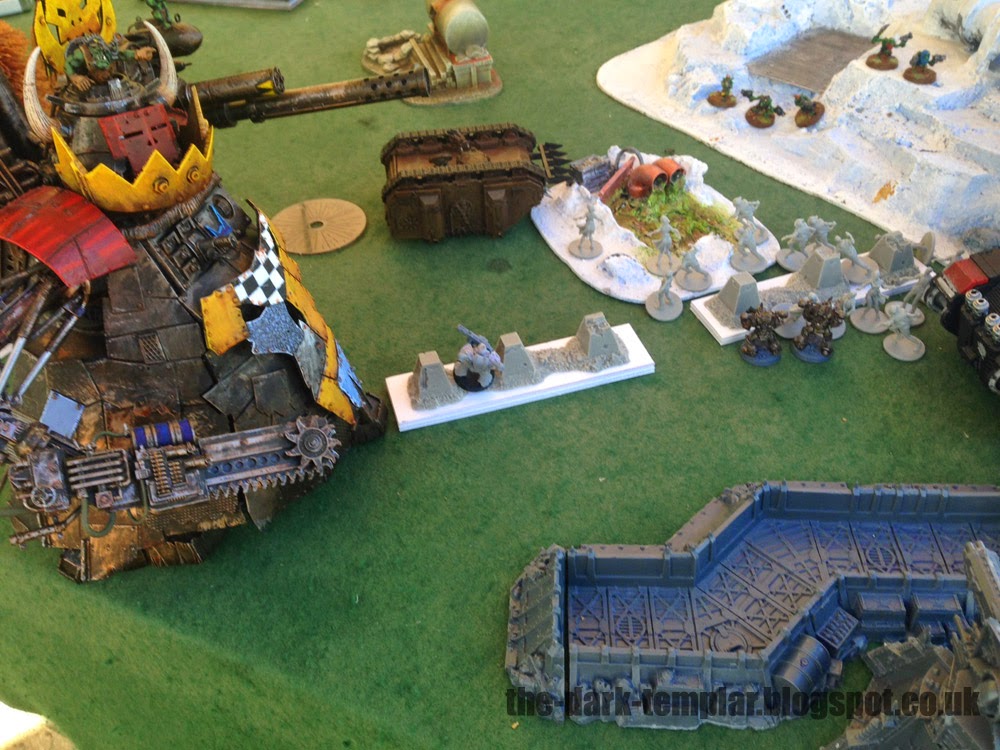 The Stompa itself was a worry before the game. I was expecting it to show and on paper it could have decimated my army rather quickly. Its opening salvo destroyed one of my lovely gun batteries and injured a rather relieved Hellbrute. However, after that it became rather underwhelming despite Bull rolling high for his number of Gatling shots each turn. When Typhus turned used its volume of shooting against it (more on that later) the Stompa became the architect of its own demise. Bull did constantly forget to try and fix hull points with his Meks which made it all worse for the Orks, but it was not a great debut for the big fella. 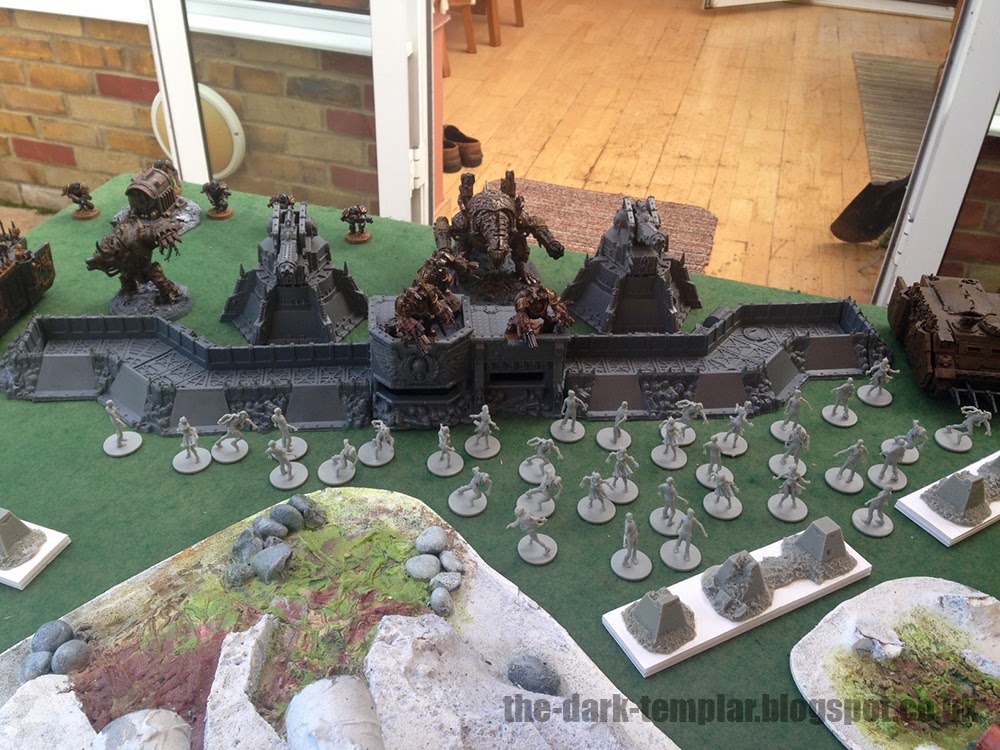 The keystone of the Chaos defence was a bunker, protected by a void shield, containing six Nurgle Obliterators – a massive 600 point investment. These boys were well protected and although the void shield came down, it was back up in a couple of turns with no damage done. The Obliterators had a fab game. They wiped out six Killa Kans in a single turn, shot down the Ork flyer and did damage to several other units. It was my intention to bring them out of hiding towards the end and support other units in combat, but it wasn't necessary in the end and they ran out of targets for the last turn or two. 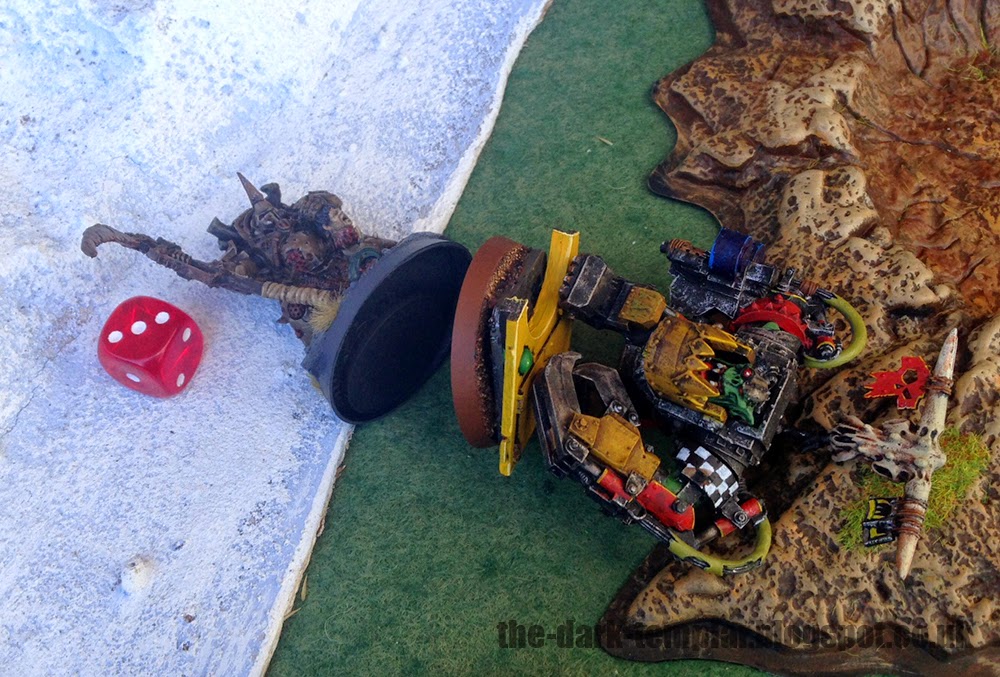 Similarly, the Chaos HQs were immense. The Sorcerer, who had Daemonology spells, managed to summon a unit of Plaguebearers (who destroyed the Battlewagon) and the Great Unclean One (who killed the Mega Nobz and a handful of Ork Boyz). Typhus dropped his malediction spell on the Stompa, making his weapons hot. This proved to be a great move and chipped away the bulk of the hull points it had. Towards the end of the battle he threw caution to the wind and engaged the Orks in combat. He probably killed half a dozen before his challenge with the Warboss saw them both die.

Elsewhere on the table, the Chaos forces had a pretty good game all round.

But what about scores?…

Typhus
Thought he might not see the outside of his Land Raider but managed to kill at least half of the Stompa and the Warboss, plus a handful of Boyz. He's expensive but he proved to be pretty vital on the day.
Score 8/10 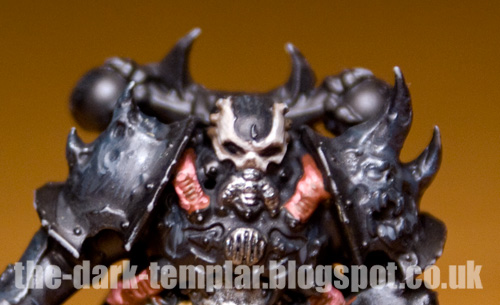 Sorcerer
I went with Daemonology and struggled to cast anything for a couple of turns. Then a unit of Plaguebearers appeared. He then sacrificed himself to summon a Greater Daemon. Awesome for the points.
Score 9/10

Terminators
I could only take three in a Land Raider with the two HQs and this isn't really enough. They probably inflicted three or four wounds but never really recouped their value. They're more protection for T than a serious threat.
Score 6/10

Hellbrute
A late addition and a bit of a waste. Didn't managed to hit anything with two turns of shooting then died to combined Ork shooting.
Score 3/10

Chaos Marines
A cheap 5-man unit brought in to soak up the last few points and to sit at the back, loiter around the generator and obstruct Bull's Kommandos (who didn't turn up to this fight). Too far out to really contribute anything and most of them got caught under a blast template.
Score 4/10

Plague Marines
Solid choice. One unit went toe-to-toe (literally) with the Stompa and came out on top. The other unit took down the Gorkanaut and jumped into combat late on.
Score 8/10

Plague Zombies
Managed to bog down the Stompa in three rounds of combat, preventing it from shooting. So worth the points, evening if they didn't kill anything.
Score 8/10

Forgefiend
Struggled to hit anything this game, but became the focus of the Stompa's shooting for several turns.
Score 6/10

Obliterators
Stunning opening volley against the Killa Kans and pretty solid throughout.
Score 8/10 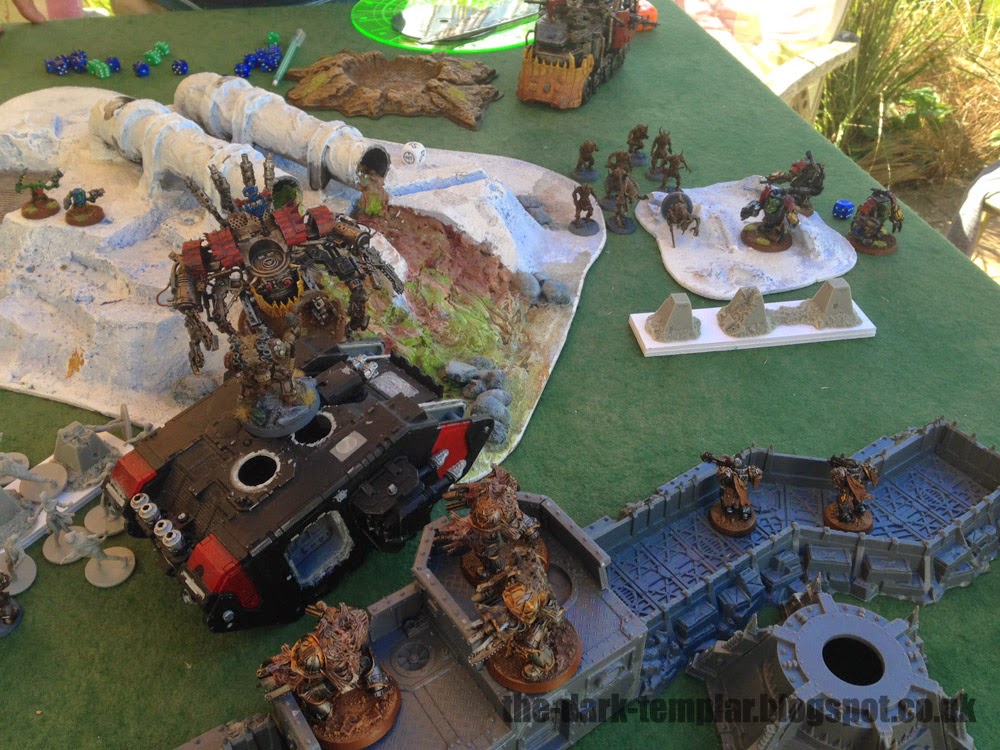 Fortifications
The Bunker/Shield combo was great. The Defence Line did see much use but presented a visual barrier which helped. The guns didn't contribute much (except killing a few Grots) and the Tank Traps proved their worth again.
Overall Score 7/10


…and the bonus units… 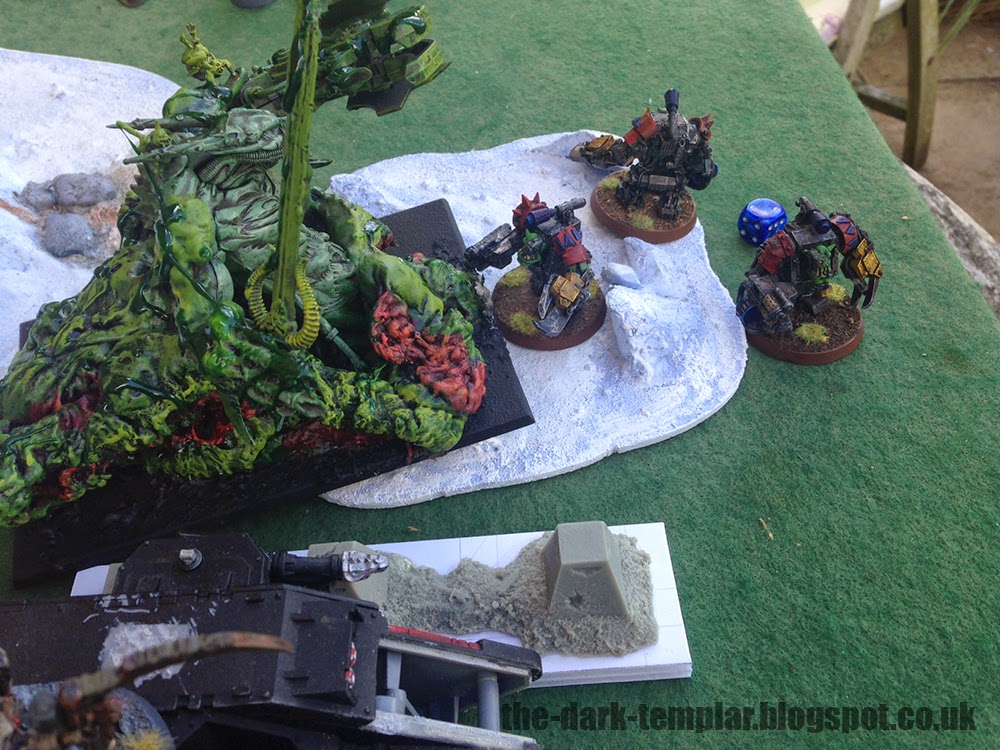 Great Unclean One
Turned out to be a bit of a bonus and tipped the balance an my right flank. Killed the Mega Nobz with ease but his biggest contribution was intimidation and the timing of his appearance.
Score 7/10

Plaguebearers
Arrived eventually and didn't scatter! They managed to destroy a battle wagon before being gunned to bits.
Score 7/10


Man of the Match / MVP
A difficult decision as a handful of units did quite well, however, I think it has to be the Sorcerer. At the cost of less than 100 points he managed to conjure up a unit of Plaguebearers worth over 100 points and sacrificed himself to summon a Great Unclean One worth over 150 points. These units definitely made a difference in numbing the Ork assault.

What have we learned?

First of all we learned that the Stompa is controllable… and Bull needs to remember it's full of Meks and can be fixed. The shooting it pumps out can be devastating but is a bit hit and miss. It's main attack is lethal in combat but the stomp attack has random results – though this too can be devastating.

The Psychic phase was great for Chaos in this game and Bull was not really in a position to counter it – I had a lot of Power dice. Again, individual spells are not devastating but can chip away at the enemy, or enhance regular attacks. The summoning was difficult to pull off (and I'm sure we did the perils of the warp wrong) but when it did come off it was great to see new units appear.

I also learned that my Plague Marines didn't often get to use their Feel No Pain roll as most of the big attacks now negated it – plus I can't roll 5+ for them, but I can for Zombies.

…And it's still all about the Shooting phase!