It's almost a month since our last game of Blood Bowl. You may remember that my Undead managed to not only score – twice – but record my first win, against none other than tomorrows opponents… the Boomtown Rats.

The game tomorrow will feature my Darkblades, who have had some time resting on their backsides since the last time they met the Rats. That match had it all: injuries, a sending off, and four touchdowns including a last minute equaliser.

Things have changed a bit since then. The Rats have their aforementioned loss against the Undead, but it did give them a few more SPPs which Bull has used to great effect, adding a claw to one of his Blitzers. The Darkblades get their Runner back after she missed the last game, though they are now missing a lineman which means there will still be two journeyman Dark Elves on the team.

I discovered that I hadn't added our "short season" bonus to my winnings last time out, so managed to add another re-roll and an Apothecary to the team. This will be great, however, my revised Team Value will give the Rats the chance to purchase inducements for the game. I don't like it but it can't be helped.

The Darkblades team itself is shaping up quite well. After the two touchdowns in their last game I now have a second Blitzer will a skill. Nenil Spinescourge now has Dodge, to add to Adin Heartrender's AG bonus from game 1. Heartrender is currently on 13 SPP so agonisingly close to his second skill. Elsewhere I have two Linemen and the Runner, Rakiri Razorwing, currently on 1 SPP so a good game and MVP will add skills here.

I would dearly love to lose the Journeymen, or at least replace one with a Witch Elf. However, I'm going into this game with no cash so I need a big win tomorrow and some lucky dice rolls to stand a chance. It'll probably take a fourth game to claw back enough money for a Witch and that's another game she's not getting SPPs. I did need the Apothecary though and the re-roll will be very useful. 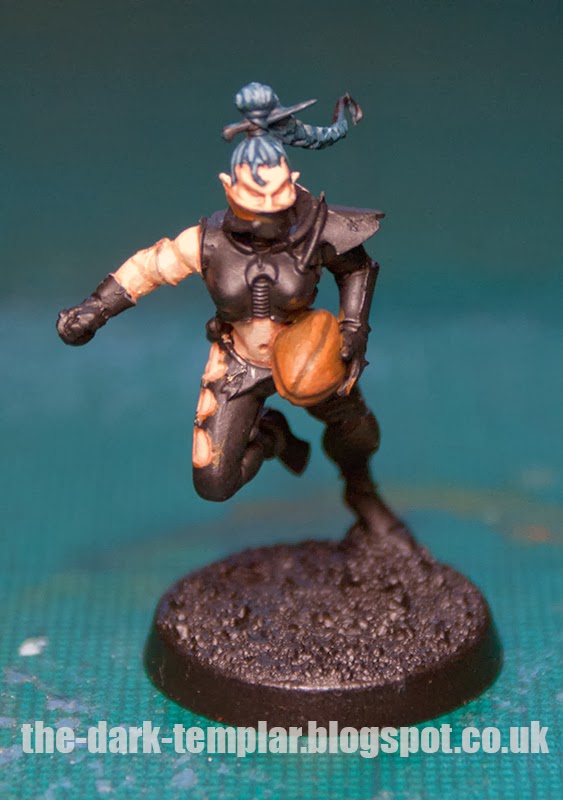 As for my new Dark Elf models, things are progressing albeit slowly. The Runner is starting to look good; I have my two skilled Blitzers undercoated and the other two are waiting for the rain to stop so they can see the love of a spray can.

The intention is to have a painting session this evening so at least these five models all have some colour on them. The remaining linemen can be made up of the original metal models.

How do I expect the game to go tomorrow?

The Rats will be hurting from their loss to the Undead. Bull will be keen to make amends and with the Gutter Runners he always has a chance to score quickly. The new Claw will give his hitting a bit more punch and I'll have to be careful who I use to square up to it. The Rats will be able to open up the Darkblades defence easier than they did the Undead, so I've done some research on possible lineups to help with that. Above all else I need to be over the Gutter Runners like a rash – the less of them on the field of play, the less I have to worry about a sneaky score coming out of the blue.

I will have my Runner back, which should give me more offensive options. I didn't use her well in my first game and the Blitzers had to pick up the slack in the last one. I'm hoping the offence can be a bit more fluid this time. I learned a lot about 'the cage' in the Undead win and am hoping that it will come more naturally now.

Regardless, it's going to be a close game of high drama, I have no doubt.