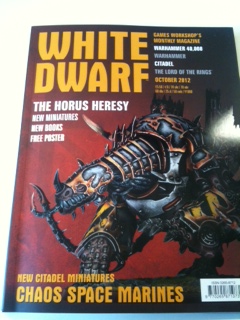 So yesterday a lot of new photos appeared on the net. The new look White Dwarf was seen for the first time. As a graphic designer I have to say…finally, some nice design executed in GW printed matter (though I bet they still don't proofread it).

This whetted my appetite and, off the back of some superb models in the Dark Vengeance box set, I was really looking forward to the imminent Chaos codex and host of new models.

As the day wore on we got to see some more covert photos from inside the new White Dwarf showing off some of these new models.

The sound of my chaos bubble bursting could be heard for miles around! 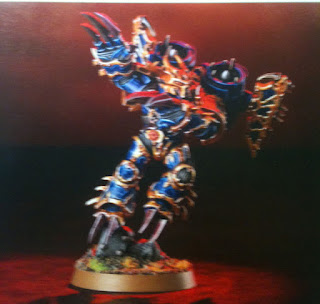 This guy wouldn't look out of place in Michael Jackson's Thriller video or on the BBC's Strictly Come Dancing! Ridiculous pose. 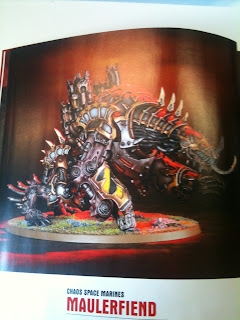 This guy was called a space badger on one site I visited yet, whilst I think it's a rip off of models like the Rackham Hybrid, it is the best of the new stuff I've seen so far. 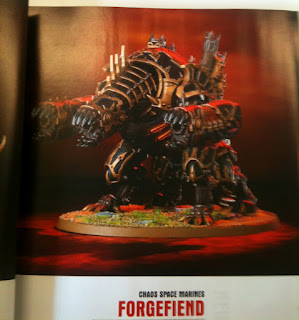 His more static, gun-toting brother doesn't do much for me really but it's ok.

The biggest offender by far is the new Chaos flyer, the Helldrake. Now, I wasn't a great fan of the Hell Talon that Forgeworld did – it was a bit too Battlestar Galactica and not enough clunky 40k Chaos for me – however, it was a ton better than the latest addition… 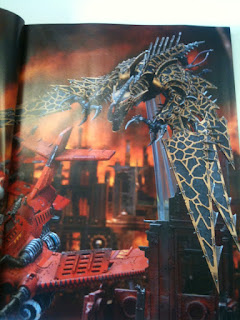 This model is ludicrous. Someone obviously had too much Mountain Dew one Friday evening and had a Zoids/Transformers DVD marathon weekend. This just doesn't say Chaos to me at all. Dark Eldar maybe. It's not clinical enough to belong to the newly turned Chaos Marines and it's not mutated enough to belong to long-term Warp dwelling Chaos Marines. It'll also be a nightmare to transport. Why can't we have something a bit more straightforward with mutated bits on it?! Or a different design for each Chaos god!

The thing that kills me is that, compared to the Chaos models in the Dark Vengeance box, some of these are terrible (I'm looking at you Helldrake). Surely they were designed at roughly the same time but don't seem to have any of the same design principles applied to them.

At least it means I will get to do a lot of converting and scratchbuilding alternatives if my opinion doesn't change… and that means more funky blog posts for you lovely people!

Go over to his site now for a stack more photos and see if they sway your opinions.

(Loving the new Raptors!)
Posted by The Dark Templar