I had planned the layout of the board quite a few weeks ago.

The original idea behind the project was to have a Malifaux board that would represent the downtown or more built up areas of the city, as this is something that doesn't seem to have been covered much – people mainly sticking to wild west, bayou or outland terrain.

Why a big X? I wanted the board to be a crossroads of sorts – kind of like The Five Points district in Gangs of New York. In order to ensure the join between the two halves of the board didn't appear down the middle of one of the roads the "+" layout became a "x".

First thing I marked up the board with pencil lines and put down some brown/green to represent the areas for buildings/terrain. I then covered the road/pavement areas in a mid grey. Due to the volume of paint required I was using emulsion tester pots, mixed with a little gaming acrylic, rather than blow my entire paint collection. 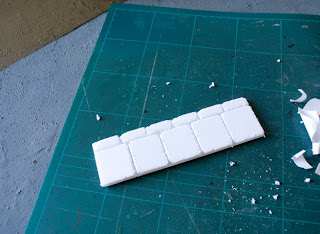 With this done I cut a piece of foamboard to the required size and carved myself a stamp to represent the paving and edging. This involved marking the design on the foamboard, taking off the top layer of card (or some of it at least), and going at the design with a scalpel and a file. Once complete I covered the surface in light grey paint from a tester post and pressed onto the board – just like potato printing as a kid! The design was repeatable so that all the pavements could be printed seamlessly. I made an additional stamp for the corners where the roads met. 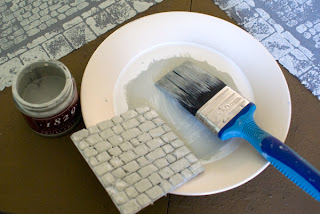 I gave this a half hour to dry while I carved out a stamp for the cobbles. This was done as a square so that the cobbles in the side roads would match the main road in orientation – with hindsight I might've decided not to do this. Using the same method as the pavements, the cobbles were printed using the new stamp. 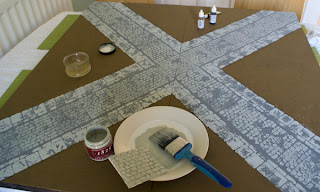 And there we have it. I have to admit I like where it is going, and the potato printing technique worked out better than I thought it would. The distressed, graphic look of the paving is great and ideal for Malifaux. I have a couple of ruined buildings and a stack of terrain to fill the areas next to the roads – I intend to build a graveyard using GW trees soon specifically for this board.

A couple of things to note – the board is not finished, the grey paint used was a bit too light and is quite busy on the eye, so I want to go back in with my full paint set and give the board more depth, highlights/shadows, some washes and details. However, for the purposes of the game this weekend I am happy – my poor wife has had to put up with the boards dominating the kitchen area for a couple of weeks now, so if nothing else it's time to give her a break.

There are things I would do differently if I were to attempt this again, but nothing major. The next time you see this board should be a post game report and then again when I get round to adding more paint.

I hope you enjoyed this project (so far) as much as I have and if you try something yourself do let me know – I'd love to see how someone else tackled it.
Posted by The Dark Templar