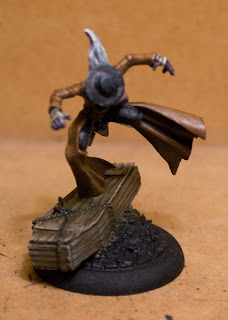 So you've seen the treatment given to The Judge in a previous post (albeit briefly) and I needed my Death Marshals to follow suit. I have managed to get a good look through a couple of the Miniature Mentor vids which have been very useful in opening my mind to new ways of painting. I had three Death Marshals in which to improve things, especially the overcoat – this is how things began. 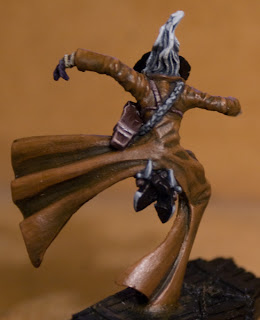 I apologise for the photo quality. My spot lamp is being used at full strength so there's a harsh highlight in some of the pix.

The Marshal above is close to completion – he only needs his base and a few details finishing – though he doesn't like his photo taken it seems. The cloak was given a Beastial Brown basecoat then liberally washed in Devlan Mud as per the previous post. I wasn't particularly happy with where that was going so I gave it a watered down coat of Beastial Brown all over except the deep recesses. I then gradually added more and more Bleached Bone to the mix, maintaining a very watery consistency throughout, going over the coat again and again. The beauty of this approach is that you get get very subtle graduations and highlights/shadows without doing any actual blending. The result was a very light tan coloured coat which was a bit bright so I went back and gave the whole thing another watered down coat of Beastial Brown, re-coating until I was happy. 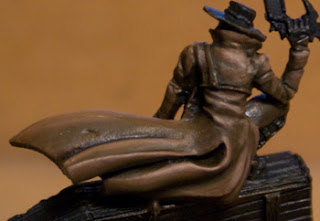 The second Death Marshal was started last night using the same technique. This time I watered down the paint even further and took the highlights lighter, without lightening the coat as a whole. It does need a little more work before knocking the whole thing back with the Beastial Brown. 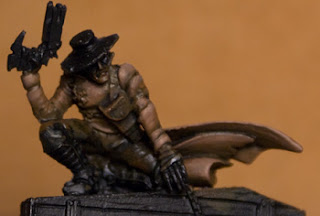 When it comes time to do Death Marshal number 3 I shall try to get some step by step shots on the go to explain the procedure better.