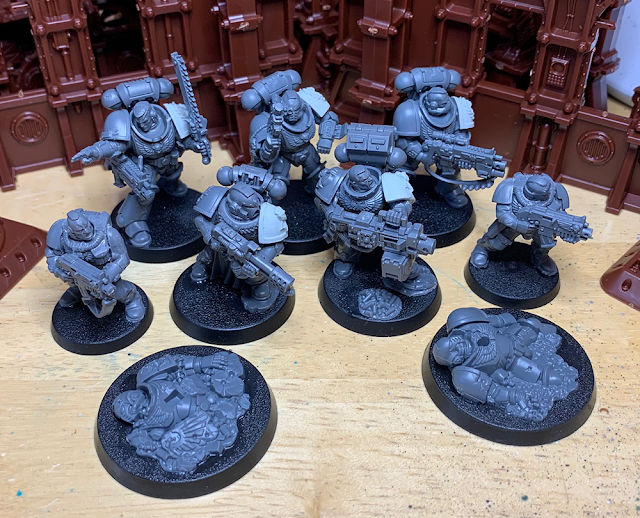 With my Kill Team list in hand I sat down with a box full of plastic sprues to construct my first ever kill team. I have built all seven members of my team to an initial stage, and will now go back to each and give them some extra bits to flesh out their individual characters. So with this first stage of building complete I thought I would take the opportunity to introduce them. 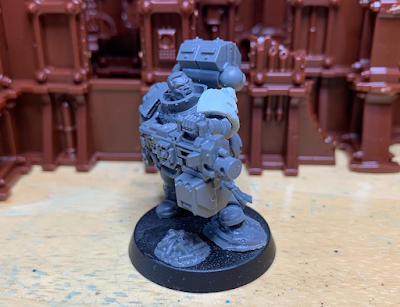 This is Gunner Marine "Dutch". He was part of the rebuilding of the Crimson Fists, after the Rynn’s World invasion by Waaagh Snagrod that left chapter numbers decimated. During his time as an Astartes he has seen many a battle, not least the second invasion of Rynn’s World, this time by Daemon Prince Rhaxor. Dutch faces all these conflicts with the same dry humour and unflinching calmness.

This is the first model I built, mostly from Sternguard Veteran bits. It was the first time I’ve put a space marine together in a while, so was a great first experience. Given that there are Primaris in the group, who do not have the same connection to the chapter and Rynn’s World as the regular marines, I want these veterans to be oozing character and Crimson Fist-ness. 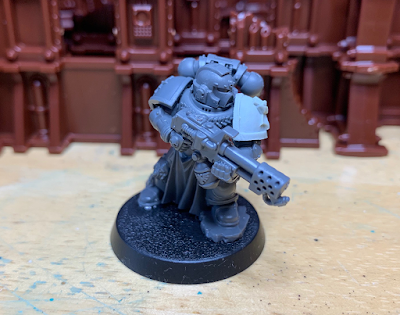 This is Gunner Marine "Fury". Another veteran who has seen his fair share of wars, he too was part of the rebuilding post-Waaagh Snagrod. He is a bit more cynical than Dutch, as well as being rather hot-headed for a Crimson Fist marine.

This is another Sternguard model, with bits coming almost exclusively from that box set. I wanted to add a couple of marines with their helmets on, so this guy was a good candidate. 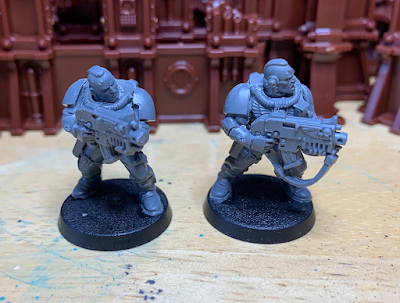 Crimson Fist Scouts "Reese" and "Hicks" are my light troops. Recent additions to the ranks of the Crimson Fists, they both showed remarkable promise, so have been given the task of surviving some covert missions with the rest of the Kill Team. They both tend to be a little rash at times, but full of enthusiasm and always volunteering for the crazy plans.

These guys are standard Scout models aside from their head swaps (which involved a lot of drilling into the body piece to fit!). The only other bit to note is that Hicks on the right has bare arms! I used the arms from the Heavy Bolter Scout model (in lieu of any Necromunda Goliath bits) to match my vision from my favourite scout pic. Needs tidying up with some greenstuff, but came out ok. 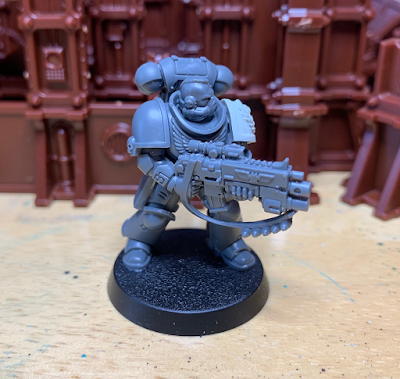 This is Primaris Gunner "Bane". Like the rest of the Primaris in this Kill Team, he is quiet and stern. Never feeling the need to talk a lot, he just goes about his job, firing his Auxiliary Grenade Launcher and taking down the bad guys.

A very straightforward model to build, using bits from the Intercessors box set. I hope to add a little more character, but not too much. 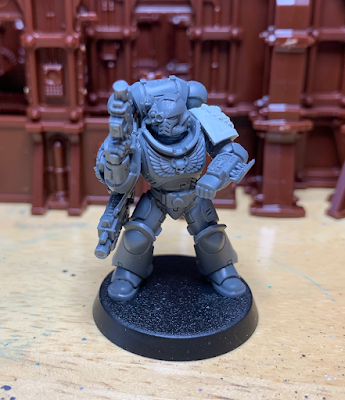 This is Primaris Comms Officer "Vector". Cold and calculating, with an acute aversion to unnecessary risks. He is likened (by the more cruel brothers) to a droid in his demeanour, lacking empathy to those around him, basing many a decision on logic and mathematical probability.

Another model from the Intercessors box set, except for his head which is from the Primaris Medic. I want to do a bit more to this guy to emphasise the comms officer role he has – unique version of armour, antenna, etc – it needs to be obvious what he does. 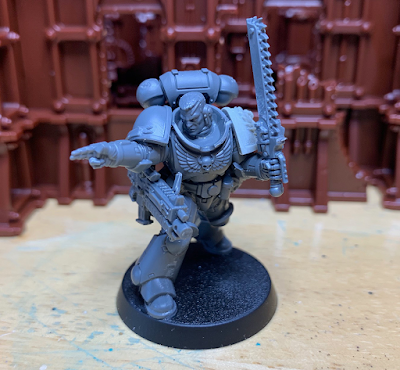 This is Primaris Sergeant "Vorn", and the Leader of our Team. He feels an immense sense of responsibility to the Chapter when commanding, and has no time for joking around. This dour attitude affords him few friends, but his leadership abilities in a firefight afford him complete loyalty from his troops. They trust his judgement implicitly.

I used the body from a Primaris Sergeant model in the Easy-To-Build kit as the starting point, using Intercessor bits and a chainsword from the Blood Angels Primaris upgrade sprue.

These casualties will make great Objective markers. It's a pity that GW don't do more of these as they're quite awesome. The one on the left came from the Primaris Medic and the one on the right came from Haarken Worldclaimer, both exotic basing elements.

So that's the team. The next stage will be to add some more bits and greenstuff to draw out their characters more, then it's on to paint!!