The big re-match came around quicker than expected but both coaches were ready to get stuck in I think. We added the final dimensions of terrain and plot cards to the proceedings. Alas the plot cards I was dealt were pretty awful, and the one I could have used I forgot about! 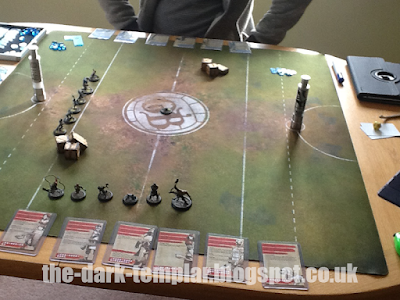 We used Bull's rather fetching salt and pepper dispensers as goals – very impressive they looked too!

Bull won the initial roll-off and decided to receive – unknown territory for me already. I gave the ball to Brisket and she hoofed it into space on the far right. Alas it scattered back and landed at Harmony's feet. No point chasing that down.


Harmony came steaming in to Boar and knocked him on his backside. The wounds were piled on and before long the big man was down to half. In the meantime Mallet was wailing on the Butchers captain, Ox. He also took a boat load of damage and was staggering on half strength before long. This was a side of the Masons I was not used too – sustained damage dealing – I was in danger of having a player taken-out (god forbid!).

The Masons moved the ball across the pitch to the other wing, where their main man Flint was waiting. It was done via a series of passes and earned Bull a stack of Momentum. This too was something I was not used to – the Masons outstripping me for Momentum points!

Flint had the ball on our left wing, but Shank still had his go left. He moved to intercept and engaged Flint from his superior melee distance. The Masons striker had a clear run on goal if he could get past Shank, but I had a plan. Each turn Flint ignores the first Tackle result against him (I've been the victim of this in the past), so come the new turn I had to make sure we got that out of the way. 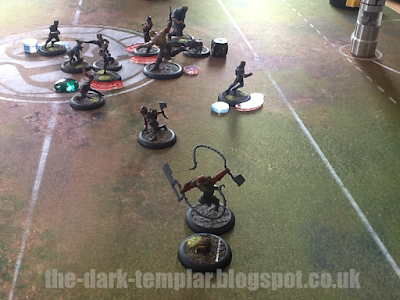 As he was within my melee zone, when Flint attempted to move away I knew I would get a free attack. I activated Shank first, did some damage on Flint and attempted a Tackle (knowing it would automatically fail). Job done.

As expected when Flint tried to run past I got my second Tackle in and stripped him of the ball. This took the wind out of Bull's initial attack but with their Momentum stacking up I knew he would win the Initiative roll and I'd probably be down a goal. The silver lining was that I had taken out Honour and was currently 2–0 up. 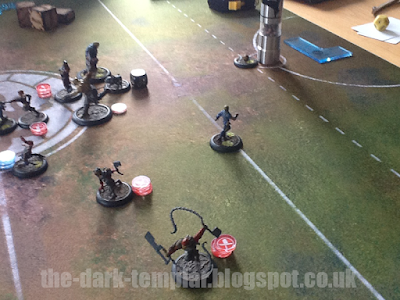 As expected Flint charged in and got the ball back off Shank. He was able to move just enough to be in range, shot and scored. The Masons took the lead for the first time in a game 4–2.

However, play continues and when the ball came straight back out and I targeted Shank when I positioned it. It landed in a decent place and he raced off down the pitch.

Whilst the main focus was on this left side of the pitch, there was something of a large brawl in the middle. Boar managed to finish off Harmony and Marbles, making the score 6–4. Both he and Ox had managed to recover from their opening wound-related scare and were almost back to full health. Brisket had taken a handful of wounds but she too had recovered. The Mason players across the pitch (with the exception of Brick) were all down to half wounds or thereabouts. 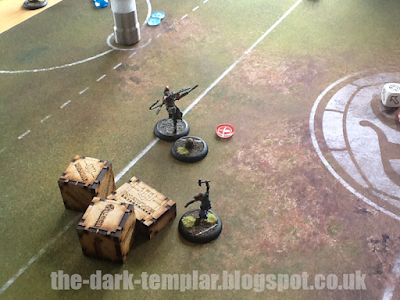 Honour had come back onto the pitch immediately thanks to one of Bull's plot cards and she raced in to stop Shank from scoring. Ironically, because she was wounded, Shank got extra change distance and managed to engage her at his maximum melee distance ensuring she couldn't hit back. He did a small amount of damage in order to get a 2" dodge which took him to within range of the Mason goal.

With only two dice and needing a 4+ it was going to be a close call. 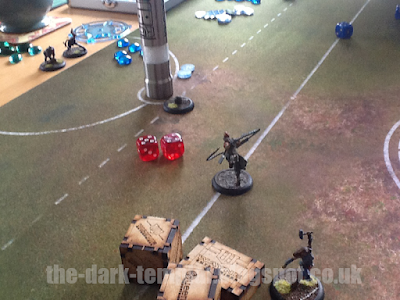 I need not have worried. The Butchers man of the match hit the target, 10–4 scoreline. I only needed 2 more points to win.

Shank then raced away towards Honour – he had to try and prevent the inevitable immediate counter attack. He wasn't quick enough.

Bull calculated his sequence of moves in order that Honour could get the ball to Flint, but when it was executed it somehow didn't work out. We went back and talked it through step by step to make sure he was maximising the available options. Eventually it all fell into place and Flint was away with ball in hand. With nobody in his way he strolled towards the goal, shot and scored. 10–8 and things were hotting up.

I knew that by this time most of the Masons had taken heavy damage. I only needed to take one down in order to kill the game. I had to decide where to place the ball after the Masons goal, so I pinged it across the opposite side of the pitch from Flint, into no mans land. Bull couldn't possibly get to it before I had killed off one of his players.

It fell to Boiler to take the glory and he leaped at Honour, needing only two rounds of melee to finish off the Masons captain.


This was a much better game than any we'd played so far. Bull had got the Masons playing much more as a team and playing to their strengths. We were both having to out think our opponent rather than just outfight each other.

Once I'd ridden out the opening exchanges and starting to inflict a bit of damage I grew in confidence and in the end was happy to concede the second goal in order to set up the finale. Lots to talk through and analyse. I think we may see a lineup change next time out!