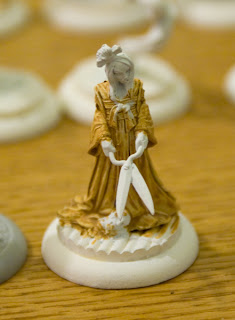 So last night was the big rematch between Lilith and Kirai. I had tweaked my list from last time to the following:

I was looking forward to unleashing The Hanged's abilities, the potential is amazing. I was also going to try the "Datsu kills Merc and replaces with Seishin and Gaki/Onryo" trick in turn 1 to gain an additional model immediately. However, this Ressers deck doesn't seem to like me much (must be all that time playing as The Guild – it can smell the starch) and my opening hand was pretty awful and devoid of any crows or masks.

Turn 1 was a bit of a shuffle and killing aforementioned Merc. Kirai summoned an Onryo who shot up the right flank, and a Shikome who shot across to the left flank to chase down my Grudge target – a Young Nephilim. The Hanged moved across to sit on the Line in the Sand token nearest the board edge, to prevent Fug's from interacting with it.

Can anyone guess what happened next?

Earthquake is what happened next! Fug's saw my error (or rather lack of intel, as I had missed the fact Lilith had the ability) and pushed both the Onryo and Hanged off the board, and almost took Datsu-Ba as well.

That sweet move put me well and truly on the back foot – 13ss worth of models gone in a single move – and set the tone of the rest of the game. Kirai swirled over to the Shikome, with most of her spirits following, but I was struggling with a lack of crows in my hand and couldn't summon Ikiryo. Even when I got my spirits into combat they seemed unable to do more than the odd wound or two. Fugs on the other hand could seemingly do no wrong and was battering my crew with little effort. By the end of turn 4 I had only the Shikome (on 5 wounds) and an untouched Onryo left. Kirai had been killed (having initially survived an absolute onslaught of attacks and swirled away to recover) and Lilith had only lost a single Young Nephilim.

I called it, Fugs winning 8-0, the ferociousness of the defeat making me feel bruised and battered for the rest of the evening. I'm not a good loser (at least not after such one-sided games) so of course the post mortem started within seconds of the game finishing and continues this morning. 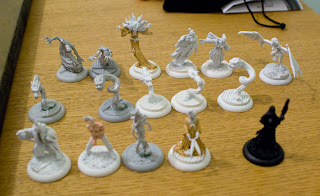 I've done a lot of reading up on Lilith as this was obviously a flaw in my preparation; in my arrogance I thought I had the measure of her. I've learned a lot of things, such as she needs to discard a card when using (2) Whirling Death, gains a card when she damages a model (discarding a card if it isn't killed).

EDIT: Just read that when she uses Whirling Death, Lilith has to hit her own models too if they're within the 2" range.

I also have a lot of questions, such as Transposition – is LoS to the target models required? This doesn't usually matter as Lilith has Master of Malifaux and ignores terrain effectively. However, when her totem (who doesn't have MoM) is casting Transposition does it need LoS to the targets? This would have made a difference to the game last night.

EDIT: According to Spell Basics in the Rules Manual:
"Spells require LoS to their targets unless otherwise indicated in their description. Spells affecting more than one target do not affect targets outside the caster's LoS."


The knee-jerk reaction is buy more/bigger models (it is the 40k way) but I think I'll stick with what I have and concentrate on painting (they are desperate for colour as you can see above) and learning with them rather than concocting a new killer list.

I had to remind myself that I have played precisely 3 games with this crew and it is very different and more complicated than the Guild crews I'm used to, there are bound to be mistakes and a learning curve. Whilst Fugs has only played 1 or 2 games more with his new Lilith crew, it is a more straightforward crew and he has just reached the point where things are clicking into place. He played very well last night – possibly the best he's played so far – so there's no taking that away from him.

So there we are. Kirai goes back to the drawing board to rethink things. I still have a second Hanged model, plus Jack Daw and Insidious Madness (not forgetting Kirai's Avatar) to come on as subs at some point, but my thinking is to stick to a lineup for a few weeks and see if things turn around.

This must be what it's like to be a Premiership manager!?!
Posted by The Dark Templar