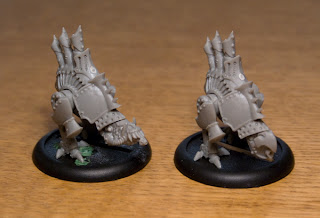 You may remember, in my post about building the Cryx Starter set I had an issue with the glue, eventually discovering that Privateer recommend superglue despite the models apparently being plastic. The general consensus from across the net was that they are in fact a form of resin and should be treated as such.

Fast forward a couple of weeks – I was watching the latest video on the RHQ YouTube channel about unboxing the new plastic Hordes Starter sets. Imagine my surprise when Andrew Galea tells us he stuck all three box sets together with plastic glue!

This called for some investigation, so these last couple of evenings I opened up the Cryx Bonejack kits I had stored away to see if the plastic glue would work after all. I am happy to say that the two 'jacks in the above photo are stuck together with plastic glue – straight out of the box, no washing in soapy water or preparing in any way. Time will tell which is the better glue option long-term, but this was very encouraging. 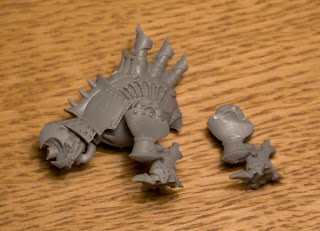 However, I hit a problem when it came to the second Nightwretch Bonejack – can you see what it is?

It seems I have been unlucky with my Privateer Press purchases in the last month. Not only did my Everblight starter set have a missing leg and the wrong spell card, my Nightwretch box had too many right legs and not enough left legs!

I could contact them again but it's getting boring now and I don't want to wait. So, much like the one-legged Shredder, I will have to come up with a solution to turn a right leg into a left leg (or replace it entirely) – I love a hobby challenge so stay tuned for that one.