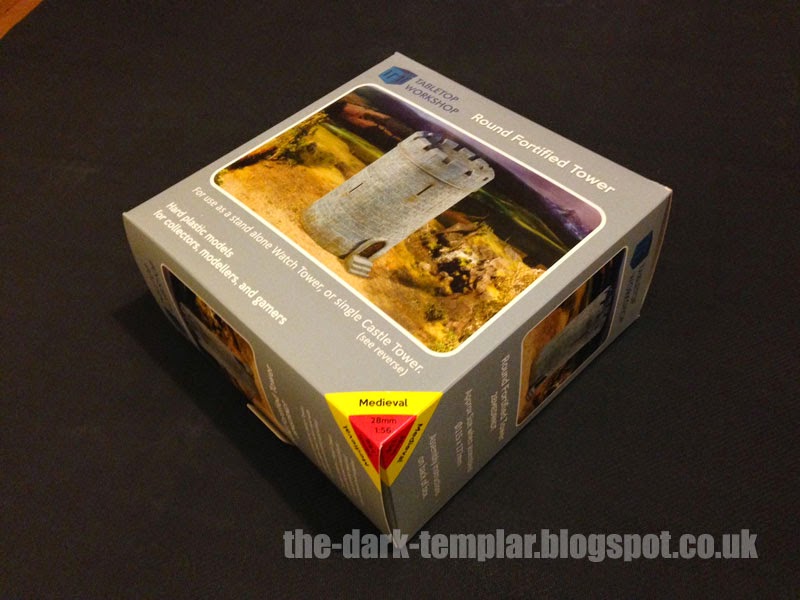 After storing the rather large parcel in the garage for a couple of days, I managed to find a spare hour last night so thought I would dive in and start building my plastic castle by Tabletop Workshop.

Given that their other buildings were so intuitive to put together, how much more difficult could the castle be?

The castle consists of 4 Towers, 3 Walls, a Wall Gate and connectors for the whole lot. I decided to start with one of the Towers… 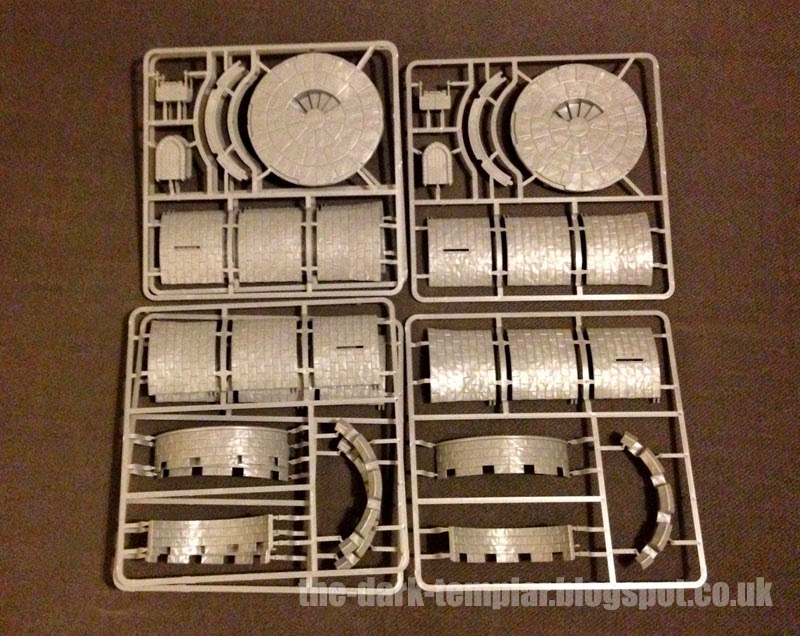 It all looked very straightforward and upon opening the box I found six sprues of two different types. It's a very cleverly designed kit and, just like the other buildings, TW have managed to keep things very streamlined and production costs low by repeating elements.

The instructions (on the back of the box) suggested that I start with the base so I duly obliged.

Unlike the instructions on the previous building kits, the one for the Tower was more like an exploded diagram, so after a quick look I figured I had the measure of it… err, not really. 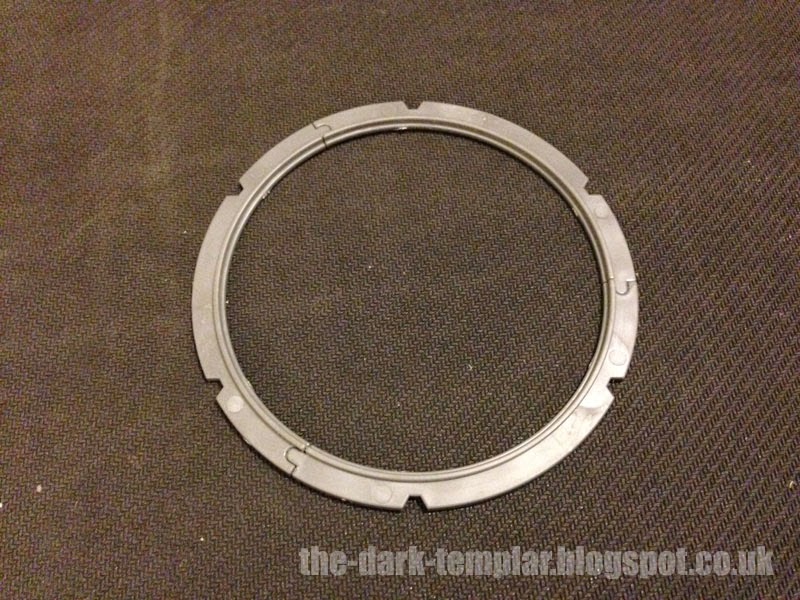 The three pieces that make up the starting point were found and stuck together. "This is easy" I thought, but my lack of preparation would bite me in the backside before I was done. 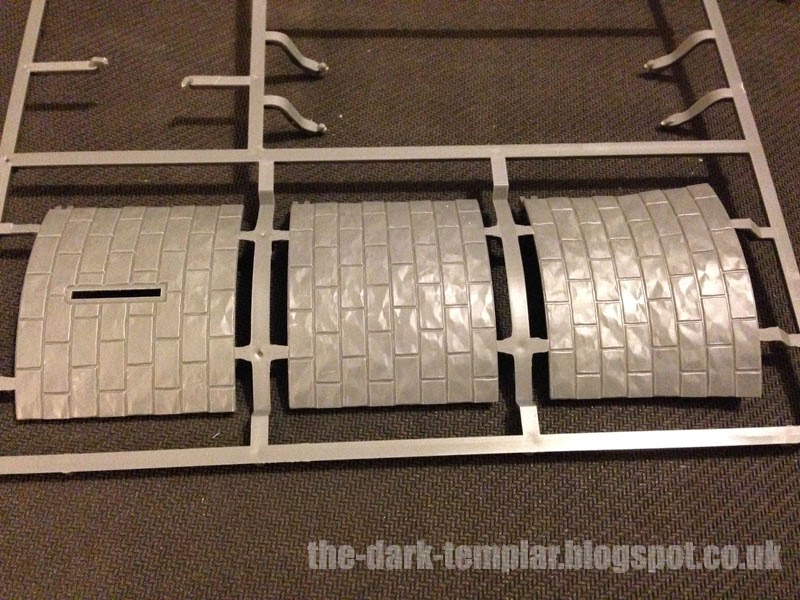 MISTAKE #1
What was not obvious (to me) in my rush to get started was that the three wall sections that appear on all six Tower sprues are slightly different. The one to the right of the image (above) flares out slightly at the bottom and (I was to find out) has different fixings underneath. I began clipping and sticking random wall sections to my base before I realised my mistake. 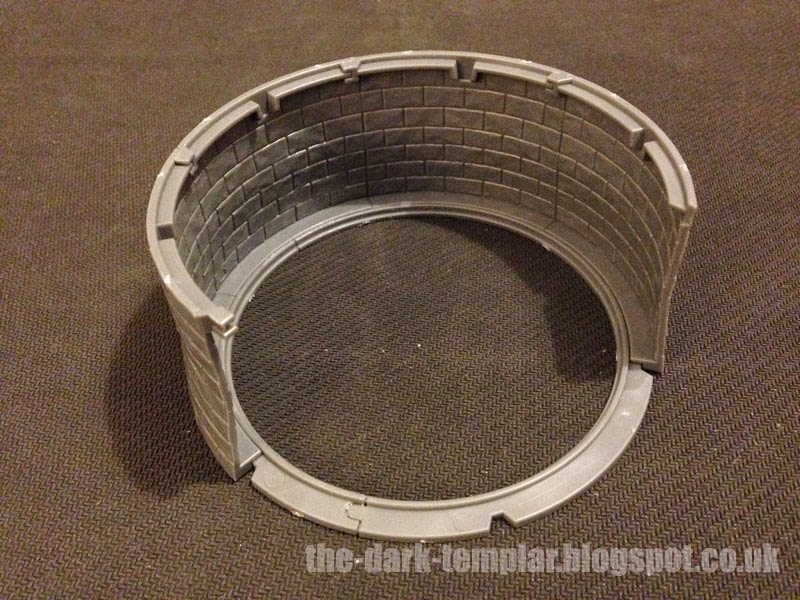 What I should have done was clip out all the flared sections and use them on my base, as above. Not a problem. With the base piece done I moved onto the first floor. 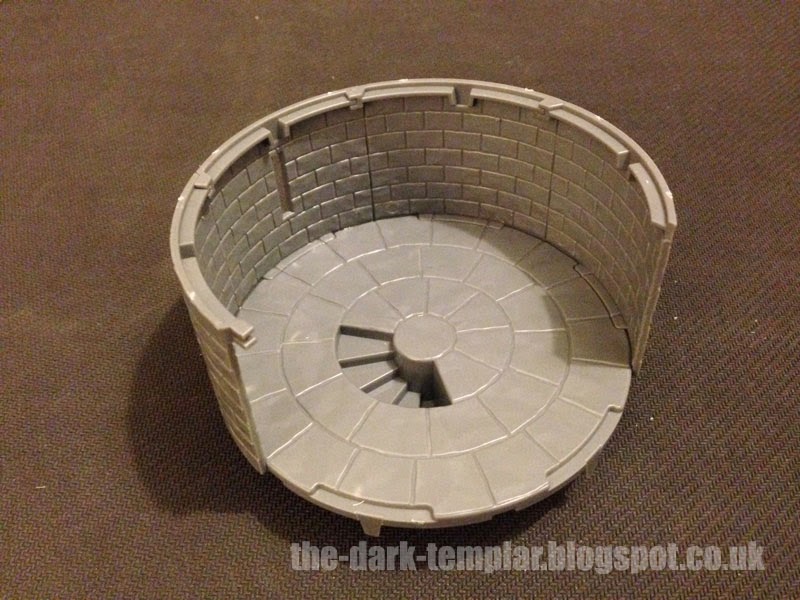 MISTAKE #2
Again, I began sticking random wall sections, this time to my first floor before realising that, unless I want several window sections on my second floor, there should be three window and three blank walls to each floor. In the photo above you can see I'd stuck two blank wall section next to each other, leaving me with an abundance of windows.

Not a problem. This was fixed and with the experienced gained my (identical) second floor was completed in minutes. 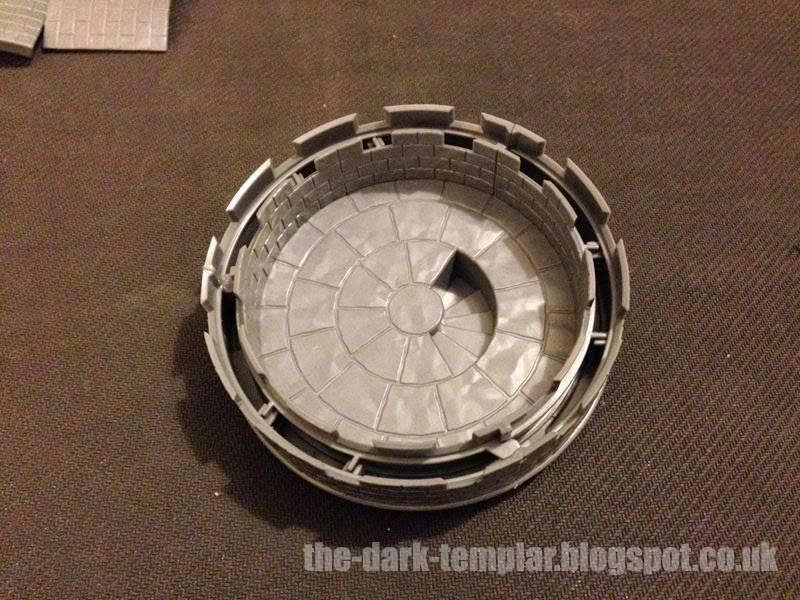 Next came the top of the tower. Being very cautious I managed to get this right first time. You start off by sticking the three outer and three inner wall sections to your floor. 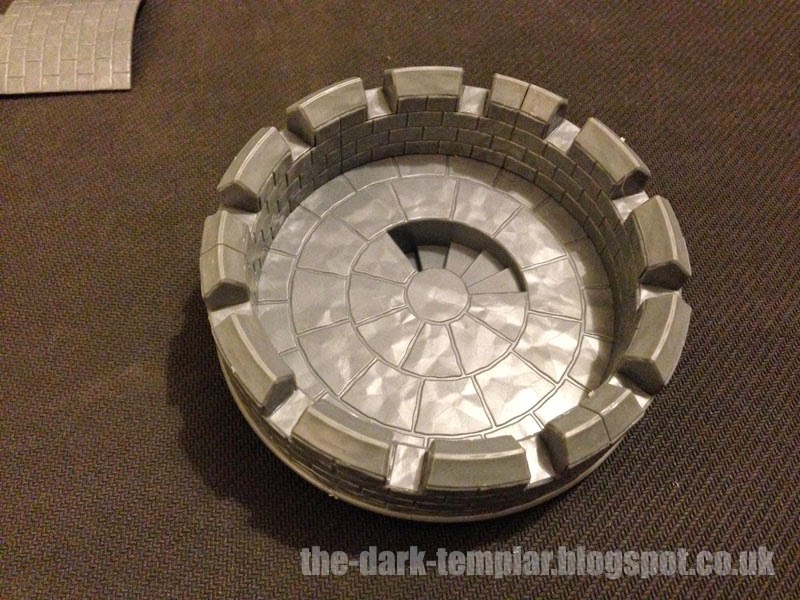 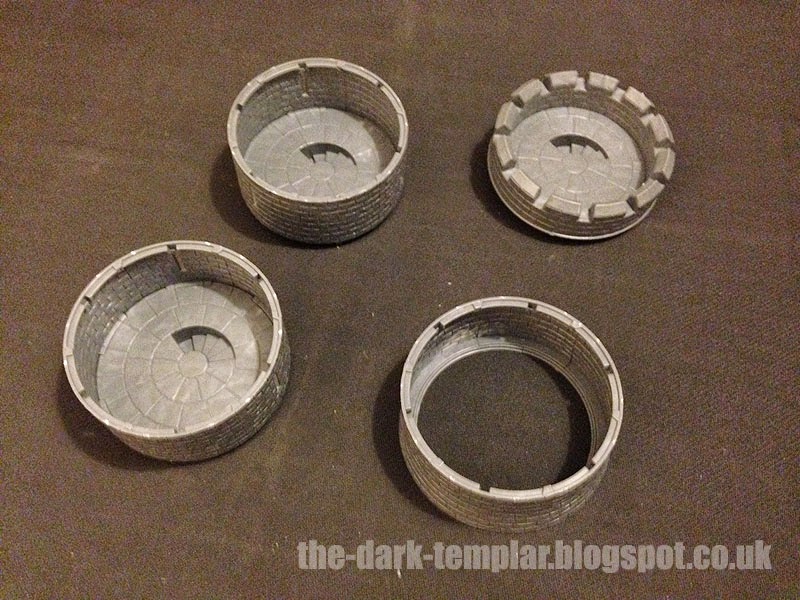 With all my sticking done I had my four floors ready to go. A simple stacking job was required and voila…a tower in an hour. There is a door and step that can be added to the ground floor, but I left things plain for now. 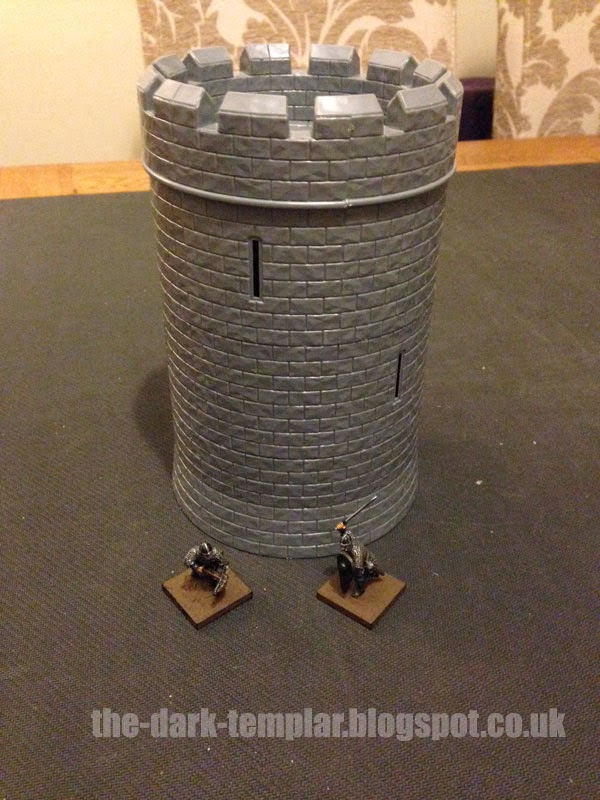 Let's not mess around here – this kit is simply awesome. It doesn't have the detailed elements that, say, the chapel has – but that's good. It's a blank canvas for you to tailor to suit you. All the important bits (like the brickwork) are very detailed, but it's not cluttered with random stuff… books on the floor or drapes on the walls, that you'd have to cut out if you didn't want them. If you do want them, you can add them yourself later.

I'm very excited to move onto to other elements. It'll be great to see the castle slowly come to life. 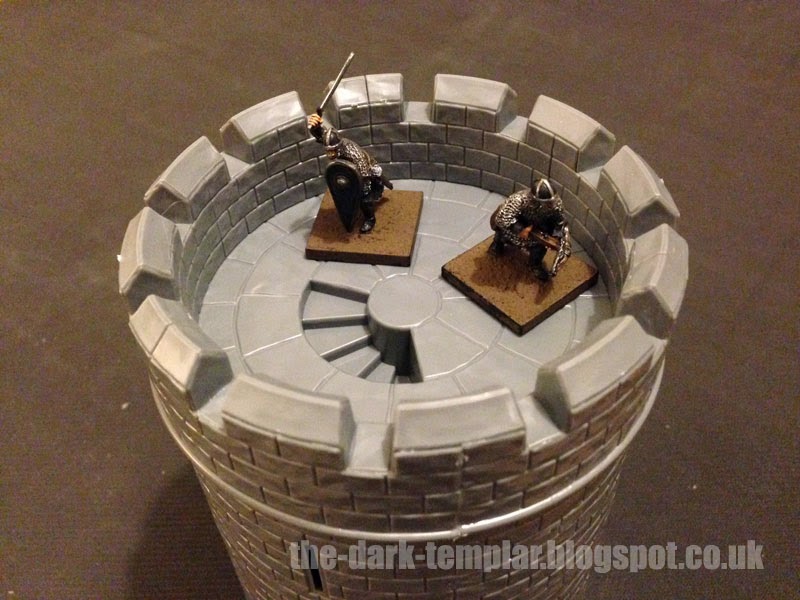 The models look great in the top of the tower and because I didn't glue the floors together, I can remove floors and have models take their adventures inside. 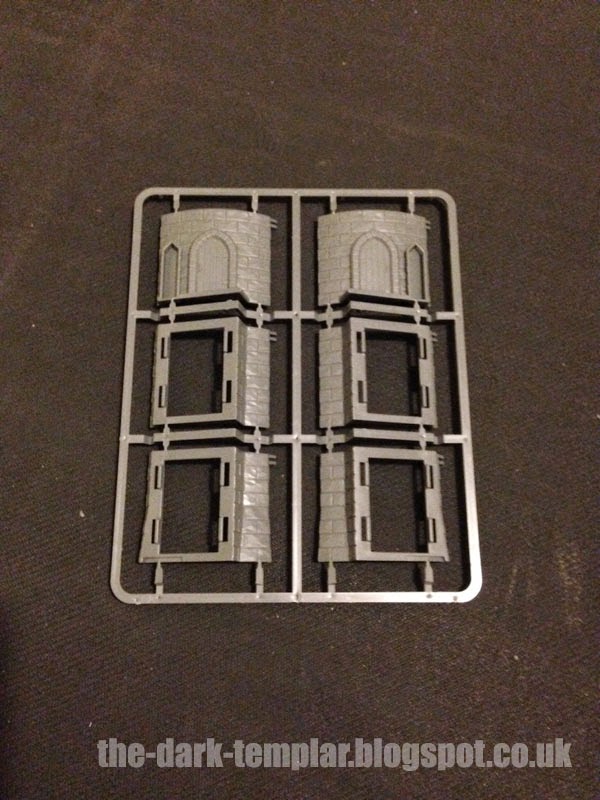 MISTAKE #3
This morning I realised that I had made a third mistake. The building method above is all good, but only if you intend to build your model as an independent tower.

I, however, wanted mine to be a part of my castle and in my excitement had completely forgotten above the connector sprue (above) which was in a separate bag in the large parcel. Though there are no instructions for how to use these (that I can see) it looks like they replace wall sections on the three lower floors so that they can clip into the (as yet unbuilt) wall and gate sections – notice the bottom piece on the sprue is flared.

This is going to mean either purchasing another tower kit to do properly, or hack up my lovely tower to replace wall sections. Neither option particularly appealing.

Learn from my mistakes…plan your build before you start!