After a successful semi-debut on Sunday with the Nurgle team, and inspired by a day of painting, I thought I would spend a little time adding some colour to my rotten players.

It was always the intention for this team to be a quick turn around in terms of painting, however, I am still experimenting with colours to some extent. Here's a run down of the process to date… 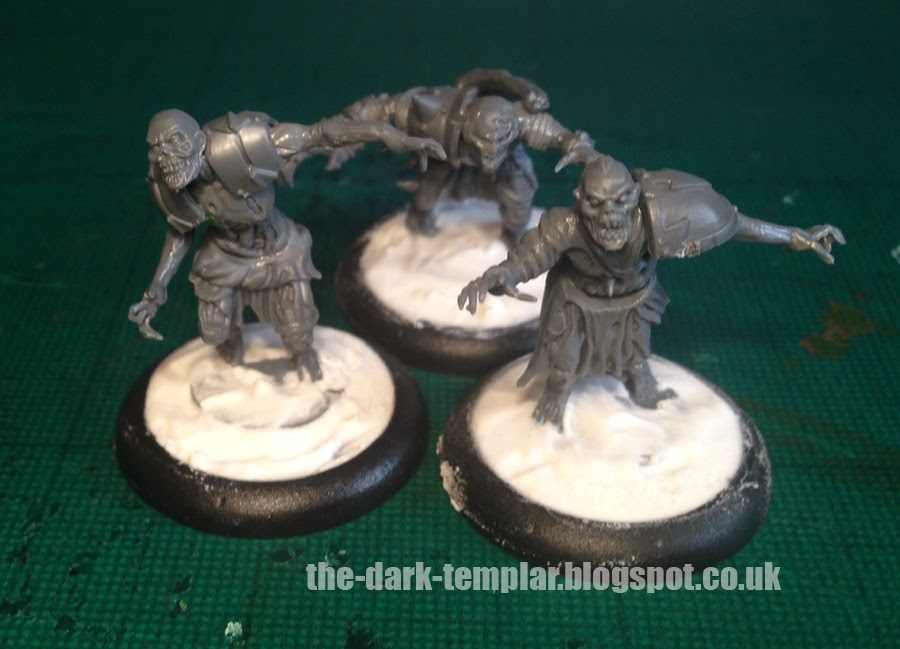 I started off – a couple of weeks ago – putting together the team on larger 30mm bases and using a bit of Polyfilla as texture. The Beast, as I discussed, is a resin piece from Kromlech; the Warriors and Pestigor are recycled 40k/Fantasy miniatures; the Rotters a combination of Mantic Zombies and Chaos Marauder bitz. 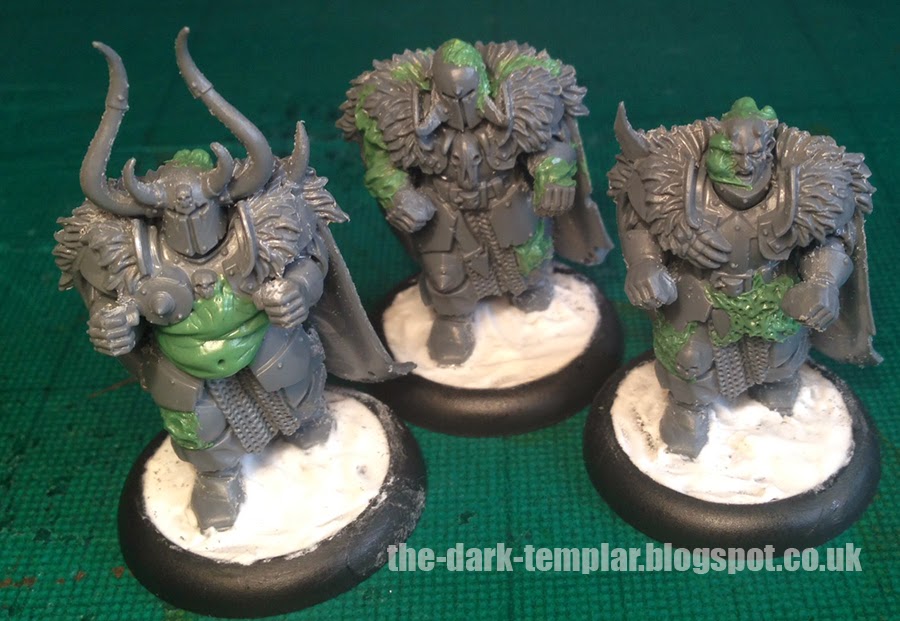 Next I got out the greenstuff and added it to every model. The Beast needed nothing more than a bit of filling. The Pestigor and Warriors had a few Nurgle extras added to have them looking the part a bit more. Meanwhile the Rotters had extensive work done, filling and bulking out parts of the models. Nothing complicated here and very quick to achieve decent results. 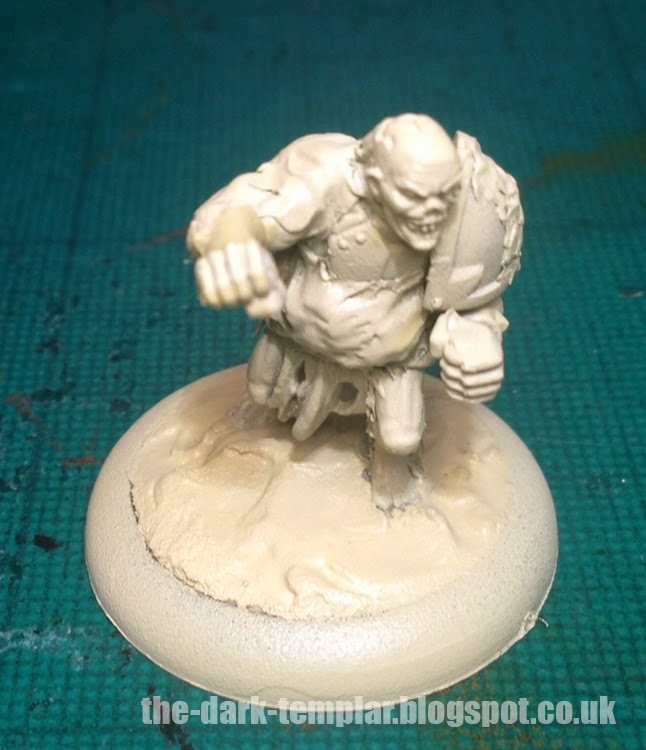 Once the greenstuff had cured, the models are spray basecoated in batches using the Army Painter Necrotic Flesh spray. A couple of passes later they look like they've been dipped in melted white chocolate! 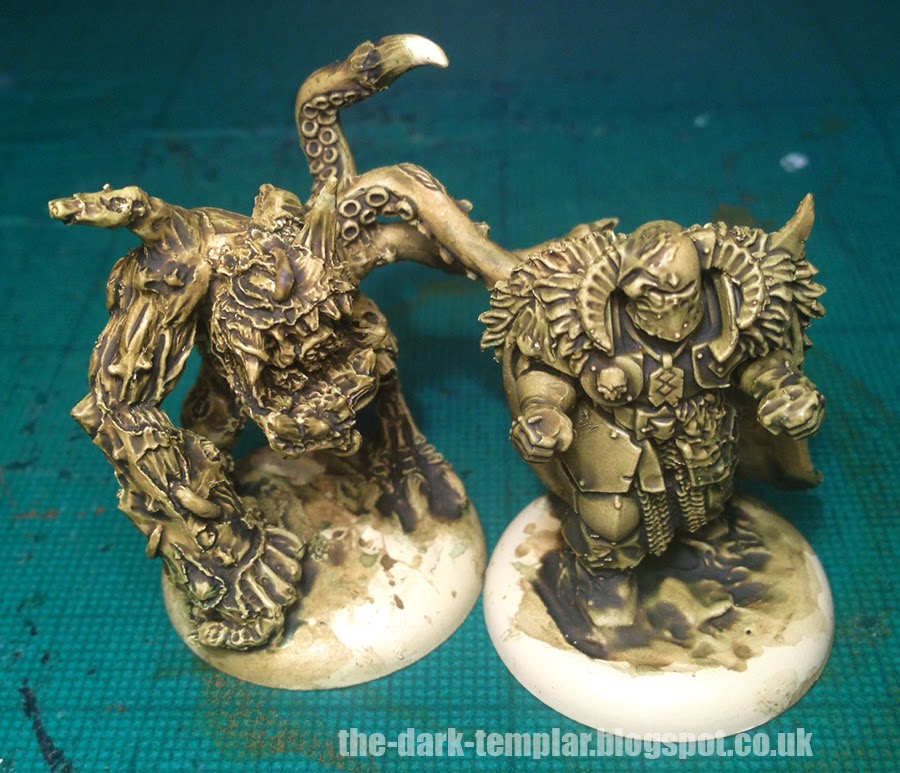 Seeing the team in their creamy base colour – eurgh! – was enough to inspire me to move on as quickly as possible. I defaulted to my old routine of lots of inks and washes.

Every model had an initial wash of Army Painter Green Tone, then several coats of Citadel's Camoshade. In fact, they had so many coats of this last colour that (as you can see) many parts of the models got flooded to almost black! Still they looked a hell of a lot more like Nurgle miniatures. 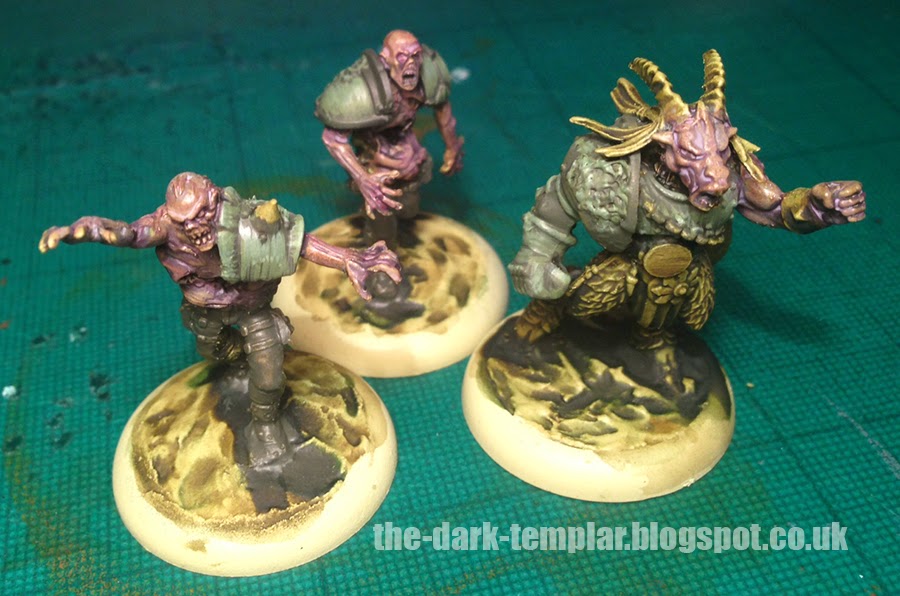 I gave an exposed areas of flesh a wash of the watered down Necrotic Flesh to offset the flooding of the Camoshade. This was then given a couple of thin washes of Druchii Violet. This added some warmth to the model, helping to offset all the green. Armour was given a quick coat of Knarloc Green with a couple of highlights.

…and that's how things stand at the moment. The armour will get more Camoshade attention, the flesh some highlights and details. I have no doubt I'll still sink a lot of time into the Beast as he's just such a fantastic model.

The need to be ready for just after Salute, so stay tuned for a final team photo!